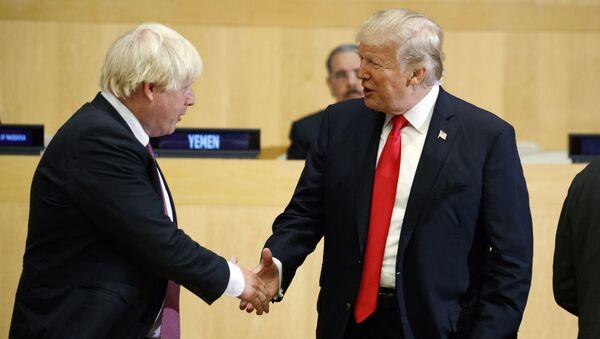 WASHINGTON (Sputnik) - President Donald said on Thursday that the United Kingdom's trade with the United States could be substantially stronger following Brexit.

"I think we could do many times the numbers we're doing right now and certainly much bigger numbers than you're doing under the European Union," Trump told LBC's Nigel Farage in a radio interview. "Your trade could be four to five times higher than what it is right now. That would make your country much bigger economically than what it is right now, and you're being held back by the European Union".

Trump said he was disappointed the United Kingdom could not leave the European Union on Thursday as planned.

The United Kingdom was supposed to leave the European Union on 31 October ''do or die'', but the European Council decided to postpone the exit date until 31 January because the British parliament failed to ratify a newly negotiated Brexit deal.

On 17 October, London and Brussels finally reached a new Brexit deal after protracted negotiations. The new Brexit draft has dropped the controversial Irish backstop to avoid a hard border in favor of giving the devolved parliament of Northern Ireland a say on any future arrangement concerning the territory. The deal was met with strong resistance in the parliament, prompting a decision to hold a snap general election on December 12.

Britain voted to leave the EU in the 2016 referendum, which was followed by the resignation of ex-PM David Cameron. Boris Johnson is now the second UK's PM trying to deliver Brexit, as Theresa May had to step down a few months ago failing to back her departure deal in the House of Commons.