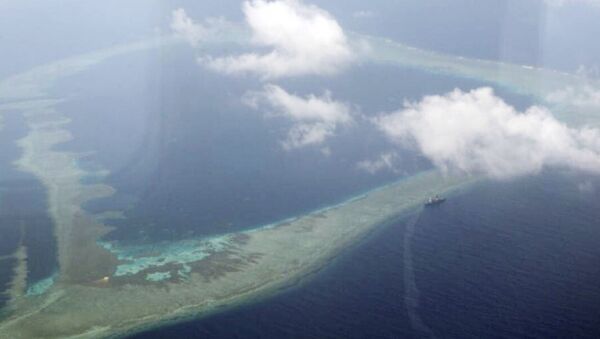 New Delhi (Sputnik): Though the US and India agree on having a free rules-based order in the Indo-Pacific, China’s intent to establish its influence over a wider area in the region is causing concern for many countries.

A top American military commander has raised Washington’s concerns over China's "aggressive and expansionist" military and naval build-up in the Indo-Pacific and Indian Ocean region.

US Pacific Fleet Commander Admiral John Christopher Aquilino, who is currently on a visit to India, told media in India's capital New Delhi on Tuesday that China poses a clear and present danger to other countries in the Indo-Pacific region.

China, for its part, believes that its economic and defence advances in the region between the Indian Ocean and the Pacific Ocean are par for the course to secure its energy requirements and boost its trade ties.

The Indo-Pacific is broadly understood to be the space between the Indian Ocean and the western and central Pacific Ocean, and the seas connecting the two in and around Indonesia.

“It is clear the Chinese Navy’s intent is to operate in a much broader area, which includes the Indian Ocean Region (IOR). I would expect to see a Chinese aircraft carrier deployment in the IOR with time", Admiral Aquilino said after meeting India’s Navy Chief Admiral Karambir Singh and others in New Delhi.

Beijing, however, says its maritime advances in the area between the two oceans, takes multiple forms.

For instance, in the South China Sea, it claims territorial rights over water and land, and this has led to ongoing disputes with six countries - Brunei, Taiwan, Indonesia, Malaysia, the Philippines, and Vietnam.

China’s growing strides in South Asian waters, alongside its “string of port facilities across the Indian Ocean, is likely to make it a resident power", Udayan Das, an Assistant Professor of Political Science at St. Xavier’s College in Kolkata city, said in a recent analysis published by The Diplomat.

The ambitiously conceived Belt and Road Initiative (BRI) showcases China’s plan to bind the geopolitical space in Asia and Europe, he adds.

Admiral Aquilino said he had no doubts about China’s “rapid modernisation of its war-fighting capabilities and increased weaponisation” clearly being a “threat to all free and like-minded nations” in the South China Sea and the larger Indo-Pacific.

India too is wary of China’s growing naval and logistical footprint in the IOR, especially after it set up its first overseas military base in the African country of Djibouti in August 2017.

Indirectly making a reference to China, Admiral Aquilino confirmed that he had discussed ways to better integrate US-India maritime operations with Admiral Karambir Singh to prevent “imaginary (maritime) lines” from being drawn.

The US would welcome any move by India to conduct joint naval patrolling or expand the Malabar combat exercise to include Australia as well, he said.

India, on the other hand, is currently reluctant to militarise the informal “Quadrilateral” strategic grouping comprising it, the US, Japan and Australia to counter China, though it recently agreed to upgrade the dialogue to the foreign minister level. It has also not agreed to include Australia in the Malabar exercise with the US and Japan.

China sees itself as a crucial trading partner for all major states in the Indian Ocean and Indo-Pacific regions.