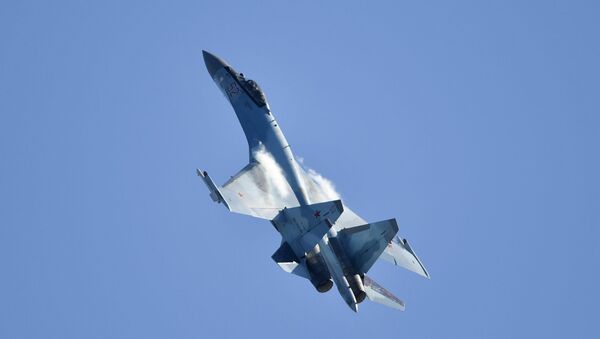 © Sputnik / Mikhail Voskresenskiy
/
Go to the photo bank
Subscribe
Turkish media outlets earlier claimed that Moscow and Ankara were in the middle of discussions over the purchase of Su-35 warplanes, following the acquisition of S-400 missile systems that led to Turkey being kicked out of the US-led F-35 programme.

Turkish Minister of Defence Hulusi Akar has rejected earlier reports that Ankara was in the process of intense negotiations over the purchase of Russia's Su-35 fighters, calling it “a lie”, according to the outlet Haberler. The comments were reportedly made during a reception organised by Turkish President Recep Tayyip Erdogan on 29 October.

Earlier, state-run Turkish newspaper Daily Sabah reported that Moscow and Ankara were close to reaching a potential deal for Su-35 fighter jets, citing local sources. This was echoed by a leading security industry outlet Defense News that argued the countries were in an “advanced stage of negotiations” over the potential purchase of two squadrons of Su-35 warplanes. The news came following Turkish President Recep Tayyip Erdogan's visit to the MAKS-2019 aviation show in Moscow this year, where he observed new generation Russian aircraft, including the Su-57 and Su-35 fighter jets

Turkey has been at odds with its NATO allies, primarily the US, since it acquired the Russian-made S-400 long-range air defence system this year. After the deal was finalised, Washington suspended Turkey’s participation in the US-led F-35 programme.

“The potential Su-35 deal has strategic value for the Russians", a senior Turkish reportedly said according to Defense News. “Moscow may thus agree to give Ankara a favourable price reminiscent of the S-400 deal".

While it has been reported that US officials are still continuing to pressure Turkey not to use the S-400 missile systems it acquired, the Pentagon said Tuesday that there has been “no change” with regard to Ankara’s return to the F-35 aircraft consortium.

“There has been no change to return Turkey to the F-35 programme", said the Pentagon’s chief weapons buyer Ellen Lord. “The S-400 air defence system, which is incompatible with the F-35, remains in Turkey”.

The S-400 system is expected to be fully activated by the end of the year, the official added.

Moscow and Ankara signed a loan agreement for the supply of Russian S-400 air defence systems to Turkey in September 2017, with the first parts of system delivered to Turkey in July 2019.

Washington expressed concern over the presence of both Russian S-400 systems on Turkish soil and participation in the F-35 aircraft programme, arguing that the fighter’s sensitive technology designed to avoid such air defence systems could be compromised following Ankara’s deal with Russia.

The US has repeatedly threatened Ankara with sanctions following the agreement, but Turkey refused to reverse the contract stressing that the purchase of the S-400s was not related to the F-35 or NATO security. Turkey was then suspended from participation in the F-35 programme under which it had ordered more than 100 F-35 fighter jets.