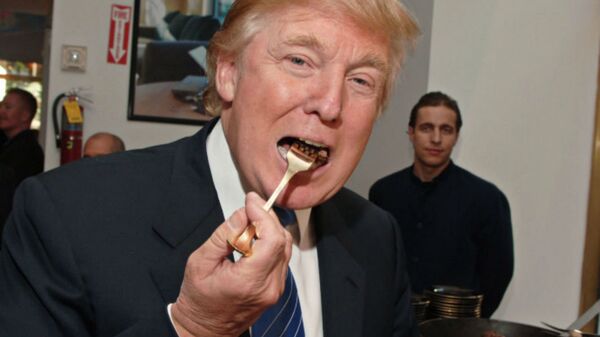 © Flickr / Peter Stevens
Subscribe
The image that circulated across social networks on Monday could hardly be an illustration to a book on Jordan Peterson and his daughter’s brainchild, meat-dominated “Lion Diet”, which has been on everyone’s lips since a different author’s work on "a carnivore diet” topped Amazon’s ratings the other day.

A White House Time journalist, Tessa Berenson, took and shared a now viral image that sported a plate with fried tomatoes and a stuffed pepper arranged to look like a jack-o’-lantern, during POTUS’s recent flight to Chicago.

Per pool report, here is the food on AF1 today pic.twitter.com/8VA6n2euDp

“The wonderful chefs aboard AF1 were full of the Halloween spirit today with the presentation of these stuffed peppers", she said per a press-pool report. “Trick or treat!”

The picture instantly set social networks and media abuzz, with many pondering if the table arrangement was appetising.

The Air Force One chefs apparently deserve quite a bit of praise, because despite the meal containing ingredients not to everyone’s liking (take fried tomatoes for instance, or salad without dressing, or bizarre brown mass on the left of the picture). They perhaps managed to trick reportedly bunless Big Mac-loving Trump into helping himself to healthy vegetables, with arguably some minced meat hidden inside the “grinning” yellow pepper.

There were no updates about whether POTUS had the same in-flight Halloween-inspired menu, or perhaps a meal with fewer veggies and no brown mass, which incidentally turned out to be an icing-coated fruit scone.

It’s not the the first time food choices have hit headlines in recent days. Proponents of a meat-only diet, Canadian psychology professor Jordan Peterson and his daughter Mikhaila, found themselves embroiled in controversy over a top-ranking new release in the Toxicology section on Amazon titled “Our Carnivore Diet". As a storm arose chewing over the headline and content of the controversial publication, both obviously irritated Petersons ruled out authorship of the best-selling edition, with Mikhaila asserting she will pick "proper headlines" when "she publishes her real book".

Speaking about “The Lion Diet” she adheres to, which includes only water, beef and organs, salt, and occasional fasting, Mikhaila, who despite having no degree in nutrition, successfully runs her own blog on the subject, said it had helped her cure severe arthritis, skin issues, fatigue and depression after traditional medicines had proven ineffective. Jordan Peterson reportedly followed his daughter's example and successfully dealt with depression and excessive weight via the diet.