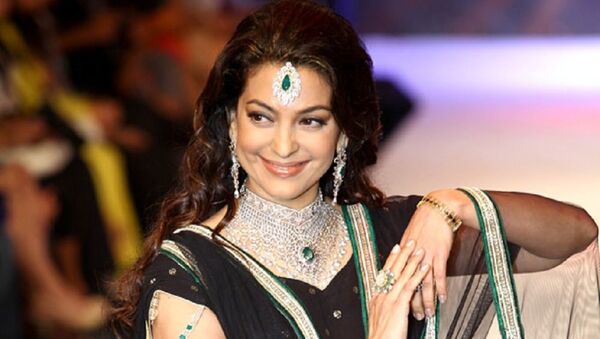 CC BY 3.0 / http://www.bollywoodhungama.com / Juhi Chawla
Subscribe
International
India
Africa
New Delhi (Sputnik): As people are anticipating the festive furore of the biggest Hindu festival, Diwali, Bollywood actors are jumping on the green bandwagon and supporting the government's initiative to celebrate a "Firecracker Free Diwali," with Juhi Chawla the latest to join the movement.

Veteran Bollywood actress Juhi Chawla took to Twitter to share how she will traditionally celebrate Diwali by lighting earthen pots and avoiding fireworks that harm the environment ahead of the festival on 27 October.

She also posted a little DIY video on making candles at home and asked her followers, “How do you plan to protect your environment this Diwali? Share your pledge in the comments below.”

How do you plan to protect your environment this Diwali? Share your pledge in the comments below..

However well-intentioned her tweet, her Twitter account was soon overflowing with ice-cold responses and social media users slamming her as a “hypocrite” over her lavish celebrity lifestyle.

Yes Madamji, do have eco-friendly #Diwali..ditch those fuel-guzzling AC cars & lit up bungalows & all night parties, cycle to a nearby slum with those traditional diyas & light up some poor families' shanties🙄
Let's save the #Fireworks for celebrity weddings & New Year, hmmm?😎 pic.twitter.com/hXMxf92hHs

That’s good that you feel this way, but that’s about it. We respect your choice and now you respect our and please do not poke your nose in our matter. Just like you we too have our right to celebrate the way we want. Happy Diwali.. we like you and please it it be like that.

Super rich like you can burst crackers at birthdays, marriages and new year parties any number of times, we common people cannot burst even once a year??? Please get lost and don't snatch our happiness.

Others also slammed her by pointing out at the huge amount of fireworks that takes place during Indian Premier League (IPL) matches. The actress owns Kolkata Knight Riders team.

Did you know, when you invest in IPL, it has fireworks going out on its opening ceremony, closing ceremony and every 6 that's hit?

Practice what you preach!

The 51-year-old actress has bestowed Indian cinema with some bonafide spectacular performances during her career in the film industry, with movies like - Darr, Ishq, Aaina, Phir Bhi Dil Hai Hindustani, Yes Boss, Saajan Ka Ghar, Qayamat Se Qayamat, amongst others.

The actress recently mesmerized her fans by sharing throwback pictures from the ’90s.

In 2018, the Supreme Court banned the manufacture of firecrackers and ruled that only 'green' crackers will be allowed for production and sale in the country, to curb pollution levels.

The Central Pollution Control Board also issued an advisory recently saying: “Diwali is the festival of light not crackers. Let's join our hands to reduce Air Pollution this Diwali and take a pledge to not use firecrackers.