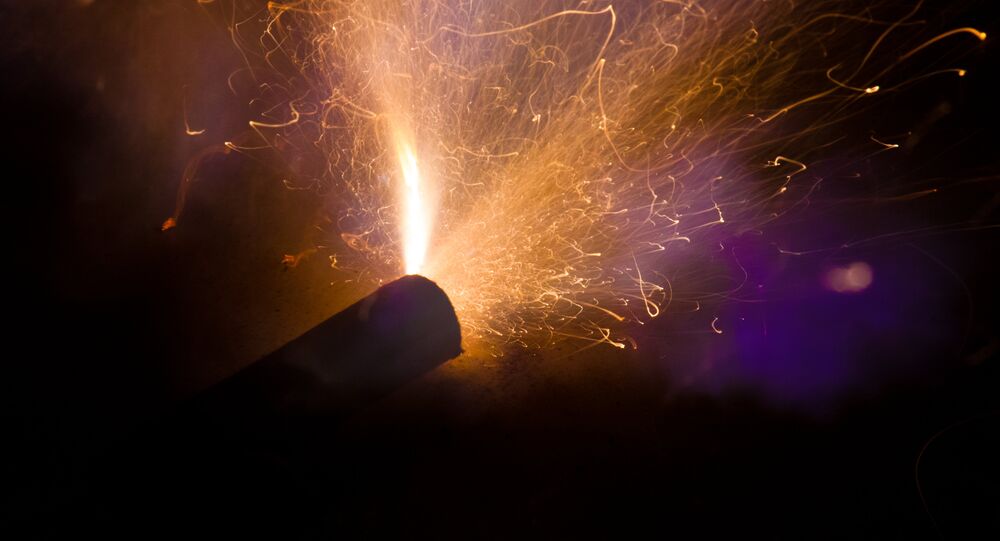 New Delhi (Sputnik): Millions of people across India set off firecrackers on the occasion of the Diwali festival. After the country’s top court last year ordered the government to take strict measures to curb air and noise pollution, the firecracker industry has taken a severe hit.

The Indian privately-owned airline SpiceJet had to face the ire of firecracker manufacturers in the country after an airport in the city of Madurai put up a sign advising people to celebrate a "Fire-cracker-free Diwali".

This outraged firecracker manufacturers, who claimed the propaganda would damage their private businesses ahead of the Diwali Festival of Lights on 27 October.

Digital banners with the slogans "Let's celebrate a pollution-free Diwali" and "No Crackers" alongside SpiceJets logo were displayed at the Madurai airport.

A popular fireworks company under the trademark "Cock Brand" rebuked SpiceJet in a Facebook post asking if the company has pollution-free planes and whether the airlines runs its planes on "green or white patrol".

"...Do you know the Co2 emissions caused by air travel are 285 gms per passenger-km compared to that of rail travel which is just 14 gms? Shall we place such banners before your offices? Don't spoil other industries for your promotion," read the Facebook post.

Following the backlash, from manufacturers and citizens on social media alike, SpiceJet denied being responsible for the placement of the banners at the Madurai Airport's baggage screening area, explaining that airport authorities had put up the banners without their knowledge.

"The banners promoting a 'cracker-free Diwali, ' put up at the baggage screening counter at the Madurai Airport, was an initiative undertaken solely by the airport operators without seeking consent from the airline. To link SpiceJet to these banners is very unfortunate and a deliberate attempt to portray the brand in a poor light. Similar banners had been put up at the baggage screening counters of other airlines as well."

Madurai Airport director V.V. Rao apologised for the incident, saying that it was a "mess up" by local staff, and the banner has been taken down.

The banners put up at the airport with the "cracker-free" Diwali messages received both praise and criticism on social media.

Several users hailed the initiative as a step to curb air and noise pollution caused by the widespread use of firecrackers during Diwali. Many others criticised it, saying it was a hindrance to their religious beliefs.

#SpiceJet UR communal. You are snatching the income of our Muslim Brothers by saying - No Crackers No Pollution-

Who is SpiceJet to tell how to celebrate Diwali.

In 2018, the Supreme Court banned the manufacture of firecrackers and ruled that only green crackers will be permitted for production and sale in the country to curb pollution levels.

The Central Pollution Control Board also issued an advisory saying: “Diwali is the festival of light not crackers. Let's join our hands to reduce Air Pollution on this Diwali and take a pledge not to set off firecrackers.

#Diwali is the festival of light not crackers. Let's join our hand to reduce Air Pollution on this Diwali and take pledge to not fire crackers.#TakePledgeWithCPCB #NoCrackers pic.twitter.com/ef2RjUZWL9