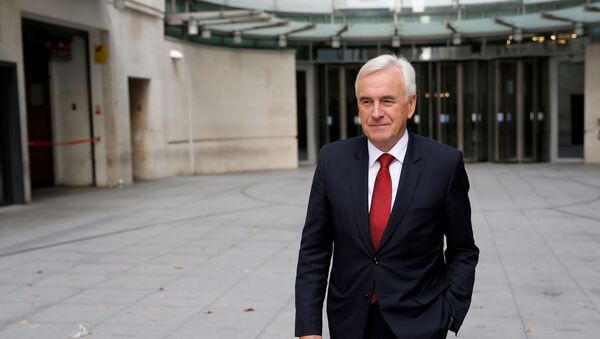 After successfully securing a withdrawal agreement from the European Union on Wednesday and ultimately solving the issue of the Irish backstop by keeping Northern Ireland in the Single Market but outside the Customs Union, UK Prime Minister Boris Johnson must now win a majority vote and pass the deal through parliament.

Labour's shadow Chancellor John McDonnell has said he will be warning Labour MPs against voting for Boris Johnson's withdrawal agreement on Saturday, claiming that no one with “the true interest of their constituents at heart” could back the deal, while speaking to BBC Radio 4′s Today programme on Friday morning.

Fellow Labour MP Graham Stringer, who campaigned for a Leave vote in 2016, told LBC on Friday morning that he was “thinking hard” about backing the agreement.

Jon Lansman the Chair of the pro-Corbyn group Momentum, said on Twitter that Labour's National Executive Committee (NEC) will have "no choice" but to replace Labour MPs who vote for the deal at the next election.

Johnson's deal will be a wrecking ball through the lives & well-being of ordinary people across Britain. Labour MPs cannot and must not vote for it. If they do, the NEC will have no choice but to replace them with a new, socialist Labour candidate at the next election

​Fellow NEC member, Huda Elmi, also tweeted "It's pretty basic. Being a Labour MP means opposing the Tories when they try to destroy our country" and called the deal "reckless."

It’s pretty basic. Being a Labour MP means opposing the Tories when they try to destroy our country. This reckless sell out deal is even worse than Theresa May's, and any Labour MP that sides with Boris Johnson has no right to stand at the next election.

​​So far the Labour Party has not said whether it will whip MPs into voting against the deal and despite rumours it currently appears that the whip will not be withdrawn from Labour MPs who vote with the government.

This comes as Scottish First Minister Nicola Sturgeon said on Friday that she has a "real suspicion" that Labour would be happy to see Boris Johnson's deal win the vote on Saturday, appearing to oppose it while giving the "nod to ‘rebels’ to ensure numbers there to pass".

Hope I’m wrong but I have a real suspicion that Labour would be quite happy to see this deal go through. They will officially oppose but give nod to ‘rebels’ to ensure numbers there to pass. It will be the end of them in Scotland if they do end up facilitating Brexit. https://t.co/OVh7K7kQlO

Both comments come amid reports that a number of rebel Labour MPs in leave voting areas could potentially support Johnson's deal if the Prime Minister agrees to include commitments to rights and protections for workers in UK-law.

An anonymous Labour backbencher from a Leave-voting constituency told the Huffington Post on Thursday said that they are looking through the text of the deal agreed to by the EU on Thursday, in particular the “level playing field” proposals to maintain the UK’s workers and environmental rights equivalent to the EU's.

“In some ways, this is weaker than May’s deal because it takes them from the withdrawal agreement and puts them into the non-binding political declaration,” the MP said.

“But if Boris can write all these things onto the face of a bill, and bring that bill forward pronto, we can vote for it,” he said.

Concerns from Labour MPs in leave seats were raised regarding the party's position, saying that the leadership were forcing them to support the deal as their constituents would not accept a second referendum.

The Labour leadership has strongly opposed the deal with Labour leader Jeremy Corbyn and Shadow Brexit secretary Keir Starmer slamming it as "even worse" than Theresa May's withdrawal agreement.

If anyone has any doubts about where Boris Johnson’s proposals take us, this lays bare that the end destination is a damaging right-wing project, which will rip apart our relationship with the EU and replace it with a US-style economy. https://t.co/F3A5M9FWGi

Corbyn has made it clear that he rejects the PMs deal and opposes divergence from EU rules and regulations on social rights, which he believes set the stage for a "Trump deal".

“This sell out deal won’t bring the country together and should be rejected. The best way to get Brexit sorted is to give the people the final say in a public vote,” Corbyn said on Thursday.

​Despite previously saying he wanted to a General Election before any second referendum on Brexit, the Labour leadership may move to force a referendum on the Prime Ministers deal.

The chances of Johnson's deal succeeding remain increasingly thin as his confidence and supply partners the Democratic Unionist Party (DUP) have confirmed that they will not be supporting the deal, seeing single market membership for Northern Ireland and the deals de facto customs border down the Irish Sea as unsatisfactory.

Boris Johnson has consistently pledged that he will bring the UK out of the European Union by the 31 October deadline. However, if the vote fails, he is required under the Benn act to request a Brexit extension.