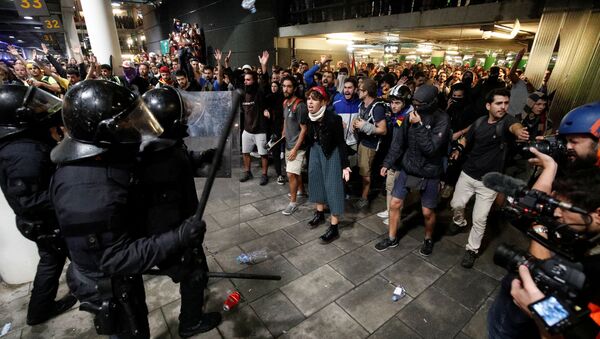 MADRID (Sputnik) - Spain hopes it will not have to apply additional measures to secure public order in its semi-autonomous region of Catalonia, following the outbreak of protests there after the Supreme Court ruled to imprison several Catalan independence leaders, Spain's acting Finance Minister Maria Jesus Montero said.

The finance minister explained that the "[We] hope that we will not have to apply any additional measures [to secure order] in Catalonia" adding that the Spanish government had anticipated a certain level of public outcry and prepared a "rational, proportionate and coherent", response to the predicted protests before the Supreme Court read the conviction.

Montero added that the government was confident in the Catalan police's ability to handle the situation effectively and preserve public order.

She also added that she hoped that going forward, Catalonia would return to "normalcy" because the protests were damaging its international image, noting that the freedom of expression should be exercised peacefully and not with the "collapse" of public services.

The statement comes after protesters in Catalonia continued to disrupt both train and vehicle traffic on 15 October in the second day of protests after the controversial court ruling.

Earlier in October, the Supreme Court ruled on cases of 12 politicians who were involved in organising the October 2017 referendum, which Madrid called illegal, handing out prison terms ranging from nine to 13 years. Thousands of protesters took to the streets throughout the country after the decisions were announced, which soon escalated to violent clashes with police. A total of 131 people have been reportedly injured in the clashes so far.