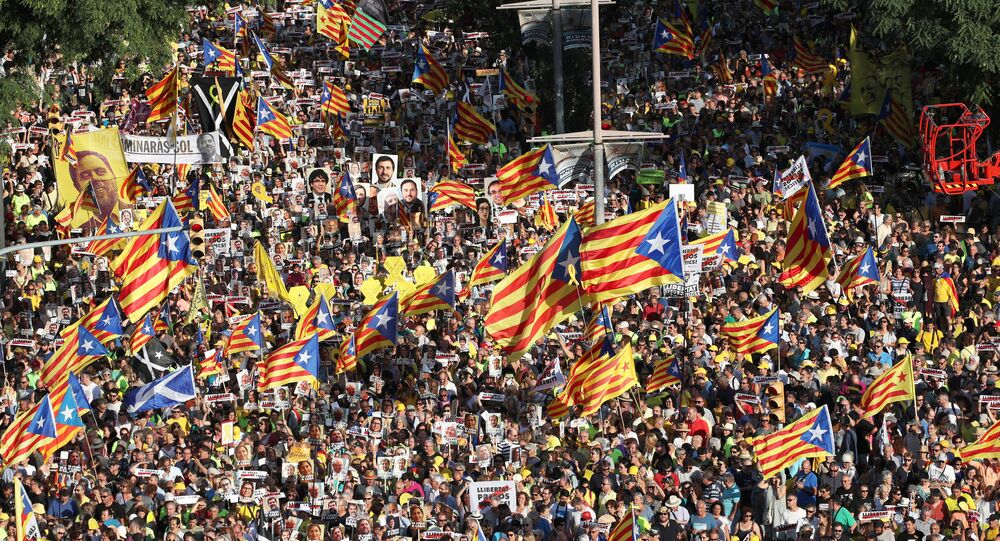 The Supreme Court of Spain found on Monday that nine of the twelve officials, who organised the referendum, were guilty of treason, rebellion, and misuse of public funds.

The news caused mass rallies in Barcelona, where protesters have blocked train and metro access to the city airport and clashed with the police.

According to reports, the central government has deployed hundreds of additional police officers in the region to boost security.

Oriol Junqueras, who had been serving as Vice President of Catalonia from January 2016 to October 2017, was sentenced to 13 years in prison for his role in organising the independence referendum in 2017.

"The Supreme Court has condemned Oriel Junqueras to 13 years of prison... on the grounds of sedition and the misuse of public funds", the ruling read.

© REUTERS / RAFAEL MARCHANTE
People holding an Estelada (Catalan separatist flag) and pictures of Catalan politicians as they walk through Via Laetana Avenue during a protest after a verdict in a trial over a banned independence referendum, in Barcelona, Spain October 14, 2019

Eight more politicians will be imprisoned for 9 to 13 years, with around 100 years of jailtime divided between those convicted. Three other defendants were found guilty of disobedience but were not sentenced to jail.

The court also issued an international and a European arrest order for ex-head of the Catalan government Carlos Puigdemont, who is now avoiding prosecution in Belgium.

Puigdemont has condemned the ruling against his fellow officials, calling it "an atrocity".

"One hundred years in prison in total. An atrocity. Now more than ever, for you and your families. It is time to react for the future of our sons and daughters. For democracy. For Europe. For Catalonia", he wrote on Twitter.

At the same time, acting PM Pedro Sanchez shared a video with Spanish ministers protecting the government and stating that Spain is one of world's "freest and safest" countries.

In 2017, the Spanish autonomous region of Catalonia held a referendum on self-determination which was not recognised by Madrid. As many opponents of secession boycotted the event, over 92 per cent of the 770,000 people who participated in the plebiscite voted in favour of independence from Spain.

Local parliament adopted a bill initiating the processes for Catalonian independence, but the central government later dissolved the political body.