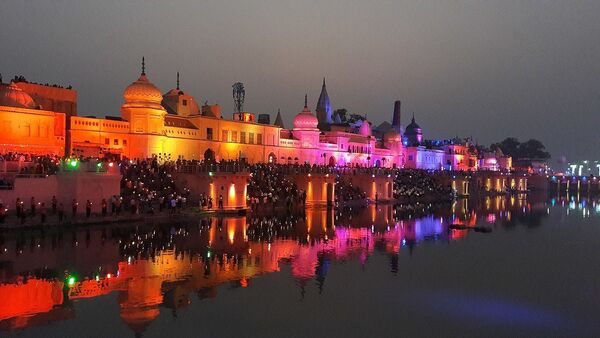 New Delhi (Sputnik): India’s apex court is expected to give its verdict on a fiercely contested land ownership case between two communities, regarding land which Hindus believe to be the birthplace of Lord Ram, one of the incarnations of the Hindu Trinity Lord Vishnu.

The Supreme Court of India has moved to rule on a case popularly known as Babri Masjid-Ram Janmabhoomi affair, and fearing large-scale protests by the losing side, the northern Uttar Pradesh government has imposed prohibitory orders in the district of Ayodhya.

“The Supreme Court of India has ceased deliberations in the Ram Janmabhoomi-Babri Masjid case and is expected to make its judgement in due course. Due to religious activities, in which various individuals, political and religious bodies are expected to take part in, and examinations in educational institutions, it is essential to maintain law and order in the district,” said an order issued by the District Magistrate of Ayodhya Anuj Kumar Jha.

The order further said, “In view of this, I order the imposition of prohibitory orders under section 144 of the Code of Criminal Procedure to maintain peace, law and order in the urban and rural areas within the district.” It has been made effective immediately until 10 December.

At the centre of the dispute is a piece of land in Ayodhya district of northern Uttar Pradesh, 700 miles from New Delhi, claimed by certain Hindu and Muslim organisations. The mosque, built by Mughal emperor Babur, after whom it was named, had existed at the place since 1528, while Hindus believe that it was built on the exact birth-spot of Lord Ram before religious zealots demolished it in 1992.

In 1949, some Hindus installed an idol of Ram inside the disputed structure, leading to its seizure by the authorities. In 1989, both sides filed cases in the Allahabad High Court claiming the land, initiating a lengthy judicial battle, considered to be the most troubled and sensitive since the country won Independence.

There were several conflicts and court disputes over the land between Hindus and Muslims, and the demolition on 6 December 1992 triggered riots all over India, killing around 2000 people.

A Ram Temple at Ayodhya was the springboard, from where the present national ruling Bharatiya Janta Party had emerged as a significant political force in India. Lal Krishna Advani, the then president of the BJP, organised a two-month-long Ram Rath Yatra – a chariot rally in 1990 to campaign to erect a temple on the site. The BJP had made the Ram Temple a significant polling plank since 1991 and came to power in Uttar Pradesh.

The BJP during the 2014 Lok Sabha elections, which brought Narendra Modi to power, had promised to “explore all possibilities within the framework of the constitution” for the construction of the temple.

The Court referred the case for mediation in March 2019, aiming to arbitrate an amicable solution, but without results, forcing it to rule on the issue once for all.