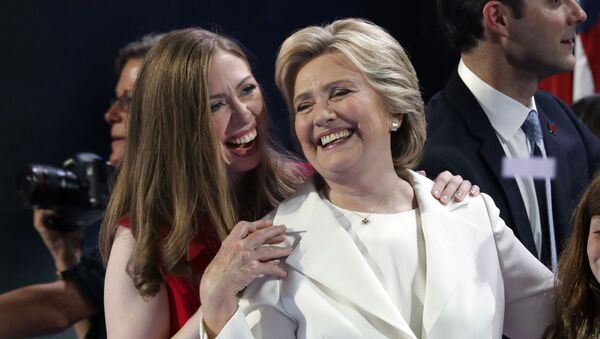 Although in most of their public appearances, mother Hillary and daughter Chelsea, seem to be doing their best to present a united liberal front, demonstrating how similar their train of thought is, there seems to be something they don’t quite see eye to eye on – a “woman” with a penis.

In an interview with The Sunday Times, journalist Decca Aitkenhead asked the Clintons, who sat down with her to promote their jointly written book on "gutsy" women, a provocative question if someone with a beard and male genitals can ever be a woman. Chelsea exclaimed “yes”, prompting a bit of uneasiness on her mother’s face. Hillary then struggled a little bit to pull herself together before uttering:

“Errr. I'm just learning about this”, the former Democratic frontrunner responded explaining away her hesitation due to the generation gap:

“It's a very big generational discussion because this is not something I grew up with or ever saw. It's going to take a lot more time and effort to understand what it means to be defining yourself differently”.

The journalist then recounted that she told Hillary during the interview that many British feminists of Hillary’s generation find it hard to understand that a “lesbian who doesn’t want to sleep with someone who has a penis is transphobic”.

In another cited excerpt from the interview, Aitkenhead brought up some women feeling uncomfortable when sharing, for instance, a female bathroom with biological men that identify as women.

Per the interview’s account, Hillary nodded firmly in response, while it caused Chelsea to send a “furious stare” at the journalist. When it was pointed out to her, Chelsea laughingly made an excuse: “I’m a terrible actor”, lauding the National Health Service’s decision to assign patients to single-sex wards in accordance with their personal self-identification.

“How can you treat someone if you don't recognise who they feel and know in their core they are?” Chelsea said before moving on to the issue of kids’ gender recognition:

“And I strongly support children being able to play on the sports teams that match their own gender identity”, she added. “I think we need to be doing everything we can to support kids in being whoever they know themselves to be and discovering who they are”.

However, at this point, the mother and daughter shifted roles, with Hillary looking conflicted this time, with an urge to hit back:

“I think you've got to be sensitive to how difficult this is”, Hillary says. “There are women who'd say [to a trans woman], '’You know what, you've never had the kind of life experiences that I've had. So I respect who you are, but don't tell me you're the same as me’. I hear that conversation all the time”.