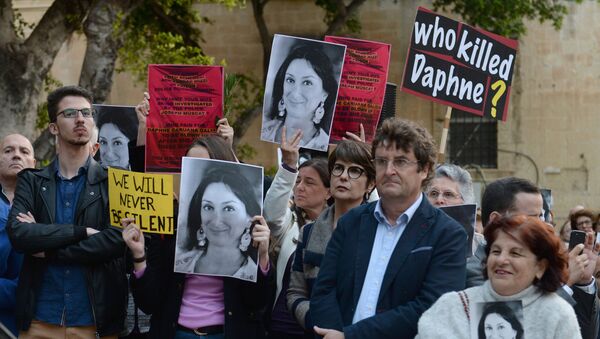 © AFP 2021 / MATTHEW MIRABELLI
Subscribe
Chris Summers
All materialsWrite to the author
In October 2017 Daphne Caruana Galizia, an investigative journalist and blogger, was killed by a car bomb in Malta. Three men have been charged with her murder but Manuel Delia, co-author of a new book on the case, says there are several suspects for who ordered the assassination.

The Prime Minister of Malta, Joseph Muscat, has set out the terms for a public inquiry into the death of Daphne Caruana Galizia, 53, but police are no further forward when it comes to identifying who hired her killers.

George “The Chinaman” Degiorgio, 57, his younger brother Alfredo and Vincent Muscat - who is no relation to the Prime Minister -  were arrested in December 2017 and are still awaiting trial.

Manuel Delia, one of the authors of Murder on the Malta Express, which was published on Monday 14 October, said: “It's clear that no-one knows better who ordered Daphne's killing than the killers themselves. But the prime minister himself just last week ruled a plea bargain or some partial or full amnesty for any of the killers to turn state's evidence against those who hired them. It's clear to us that there are stones the government dreads turning for fear of what lies beneath.”

As we approach the two year anniversary of the assassination of Maltese investigative journalist #DaphneCaruanaGalizia, CPJ calls for those who ordered her killing to be held accountable. #EndImpunity pic.twitter.com/qBgzAqCz0B

​Mr Delia and his co-authors describe a string of corruption scandals in Malta, all of which Ms Caruana Galizia had written about or was planning to expose.

In Murder on the Malta Express they write: “At the beginning of this book we described Malta as a dirty money locomotive hurtling through the night. On board, a cast of dodgy characters, with Daphne Caruana Galizia in the role of detective.”

They say the list of suspects range from Mr Muscat himself and his wife Michelle - who was cleared of laundering money from Azerbaijan last year -  to his chief of staff Keith Schembri and Energy Minister Konrad Mizzi, who were both named in the Panama Papers, Maltese casino boss Yorgen Fenech, Iranian banker Ali Sadr and the Italian mafia.

SWEEENXIT THREAD 1/3
After 17 years I'm leaving the BBC. It's high time to make trouble elsewhere. First stop, Malta. With @carlobonini and @Manwel_Delia I've written Murder On The Malta Express: Who Killed Daphne Caruana Galizia, to be published on October 14 by Midsea Books. pic.twitter.com/dElrx7GR8M

​Mr Delia said: “Two years after the fact the population is divided in three broad segments. One segment is made of people who are angry at the injustice of Daphne's assassination and the impunity for those who killed and those who were embarrassed by her revelations -- that are likely to be the same set of people. The second category is indifferent. Daphne is one of many car bomb victims in Malta in the last six years. The others were smugglers and traffickers 'known to the police' killed in gang turf wars. And for this second segment Daphne's death is no different. The third category celebrated and still celebrate Daphne's death. She broke the accepted code of silence over corruption and she got what she was asking for.”

He said there were similarities between Ms Caruana Galizia’s murder and that of Irish journalist Veronica Guerin, gunned down near Dublin in 1996 after years of reporting on high level drug dealers.

Taoiseach John Bruton described it as “an attack on democracy, because it is an attack on one of the pillars of our democracy.” pic.twitter.com/2O0i2ThwV4

​But he said: “In that case legislators realised that they needed to act not only on finding who killed her but also on changing the legislation that permitted the wrongdoing Veronica Guerin reported on. That was proper justice. Here the shocking scandals of corruption, money laundering, bribery and wrongdoing that Daphne reported on continue unabated.”

Mr Delia said there are even greater similarities with the killing of Jan Kuciak, a Slovak journalist working on collusion between criminals and politicians.

​He was killed a few months after Ms Caruana Galizia and the Slovakian prime minister resigned in the wake of his death.

Mr Muscat, whose Labour Party were re-elected only four months before Ms Caruana Galizia’s murder, has brushed off calls to resign and still remains popular because of the island’s booming economy. He denies any wrongdoing.

In court in Valletta this morning to monitor hearings in some of the vexatious defamation cases that continue posthumously against #DaphneCaruanaGalizia & a case against her son @mcaruanagalizia. First up: cases brought by PM Joseph Muscat & his Chief of Staff Keith Schembri. pic.twitter.com/sbo4hg9G9u

​Mr Delia has co-written the book with British journalist John Sweeney and Italian investigative journalist Carlo Bonini, and he said: “The three of us kept to ourselves the fact that we were writing the book for as long as we could. When towards the end we wrote to the prime minister, to his wife and other government ministers to give us replies to allegations and questions being raised in our book in place of substantive replies we got a letter from Carter-Rusk, the celebrity London libel law firm, reminding us that their clients deny any wrongdoing. The choice of lawyers - when the government has its own lawyers on staff and could have fired any one of hundreds of local firms - is of course meant to intimidate us.”

Mr Delia said: “As a journalist based in Malta I am personally subjected to frequent threats that are spurred on by government and Labour Party statements that seek to discredit me. Threats are regular and have to be taken seriously consider that I work in a country where a journalist has been killed. But there's a flipside to that. When Daphne was killed, the world's attention turned on Malta.

Why did the government refuse to strike a deal with Vincent Muscat? Is everything necessary being done to protect him, along with other potential witnesses, the lawyers and journalists involved, and their families?
6/10

​“Those who killed her must have realised that in trying to silence her stories they only achieved her death. But journalists from all over the world, including my co-authors, have landed on Malta to follow up on her work and continue working on this story. We're nowhere near done,” he added.

Mr Delia said: “More journalists are killed covering politics and corruption than in actual war zones. The stakes in this business are very high. In our book we say that ‘gangsters and their smooth-talking lawyers, fixers, and PR truth-twisters are using crooked micro-states to wash their ill-gotten gains from Angola to Azerbaijan so that their money ends up in London, Miami, Rome, or New York’. Being in Europe does not stop the crooks from eliminating journalists that get in their way.”

Mr Delia said: “This book is our attempt at a tribute to Daphne. Others are right to speak about her qualities as a writer, her courage and determination, and her moral example for participating citizenship that speaks truth to power. As journalists the best way for us to pay tribute to her is journalism: telling her story and the story of her work. We aim to keep the fire of her journalism burning.”