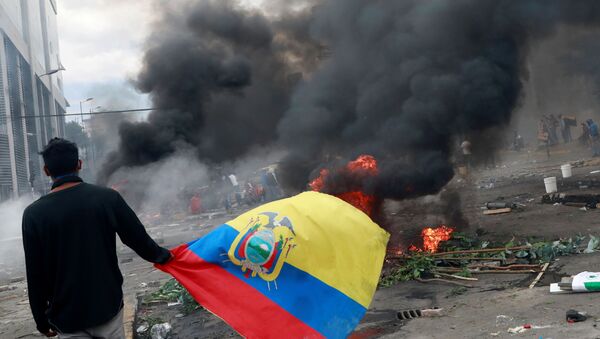 The Ecuadorian Armed Forces announced that movement will be restricted across the country for the next 24 hours.

“From 3:00 p.m. [20:00 GMT] Saturday, October 12 … a ban on movement in strategically important areas has been imposed for 24 hours,” the Ecuadorian Armed Forces wrote on their Twitter page.

Earlier on Saturday, Moreno tweeted that he had ordered a curfew and the militarization of the country's capital Quito, starting at 3 p.m. local time.

"I have imposed a curfew and military control in Quito and its surroundings. It will come into effect starting 15:00 [local time, 20:00 GMT]. It will facilitate the activities of law enforcement agencies against excessive violence," the president tweeted.

Earlier in the day, ​the mayor of Quito, Jorge Yunda, said that Moreno had agreed to reconsider his decree to end the decades-long fuel subsidies, the cancellation of which as part of an IMF loan austerity stipulation was the trigger for the violent and ongoing popular protests across Ecuador.

"The president, taking into account the complexity of the situation, has agreed to analyze Decree 883 one more time. In the next few hours, he will meet with the protest leaders," Yunda said on Twitter.

According to Moreno, Ecuador could no longer afford the subsidies and claimed that the cuts could help the country save some $2.27 billion a year. The abolition of fuel subsidies was part of the Ecuadorian government's austerity deal with the International Monetary Fund to be eligible for a $4.2 billion loan.