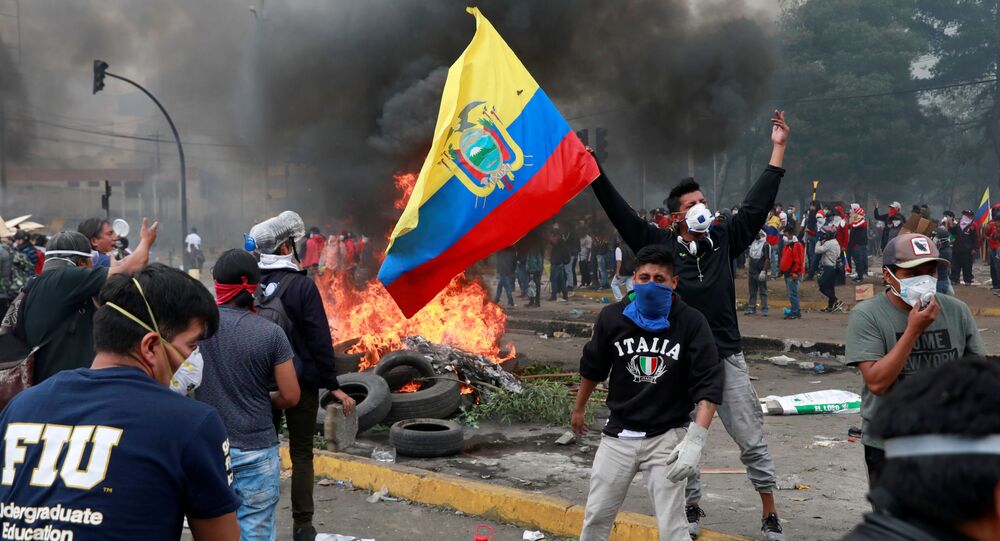 "The president, taking into account the complexity of the situation, has agreed to analyse Decree 883 one more time. In the next few hours, he will meet with the protest leaders", Yunda said on Twitter.

​The statement comes after an Ecuadorian indigenous group announced direct talks with Moreno.

Earlier in the day, authorities at Quito International Airport reported that access roads to it were blocked by the protesters.

Ecuador's security forces bombard protesters in the vicinity of the National Assembly in Quito earlier this afternoon. @teleSURenglish pic.twitter.com/yxVi5STawC

The building housing the comptroller general's office is reportedly on fire, according to videos that have appeared online.

​Since President Lenin Moreno imposed a suspension on fuel subsidies, the protests evolved into a wide-ranging set of demands that activated many social groups, including farmers, students, indigenous peoples, and more.

Mass protests erupted in Ecuador in early October as thousands rallied across the country against the government's economic reforms, specifically the decision to end decades-long fuel subsidies for people. As civil unrest grew progressively violent, Moreno declared a national two-month state of emergency. According to the president, Ecuador could no longer afford them and the cuts could help the country save some $2.27 billion a year. Additionally, the abolition of fuel subsidies was part of the Ecuadorian government's deal with the International Monetary Fund to be eligible for a $4.2 billion loan.​​