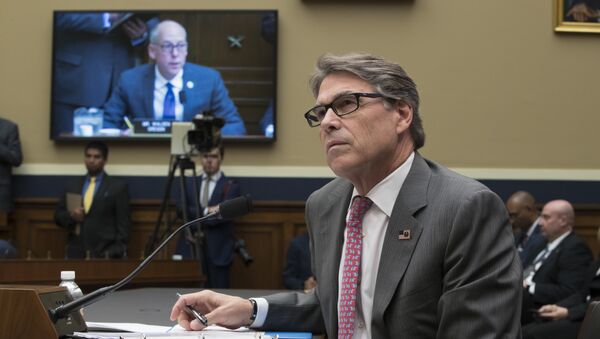 US House Democrats on Thursday filed a subpoena for US Energy Secretary Rick Perry, marking the politician the latest to join the list of individuals being hit with summons amid the ongoing impeachment inquiry into US President Donald Trump.

Perry's summons is being issued by the House's Permanent Select Committee on Intelligence, which carried out the order following consultations with the Committee on Foreign Affairs and the Committee on Oversight and Reform. It indicates that requested documents are to be submitted by October 18.

"The subpoenaed documents shall be collected as part of the House's impeachment inquiry and shared among the Committees, as well as with the Committee on the Judiciary as appropriate," reads the letter. "Your failure or refusal to comply with the subpoena, including at the direction or behest of the President or the White house, shall constitute evidence of obstructions of the House's impeachment inquiry and may be used as an adverse inference against you and the President."

"Recently, public reports have raised questions about any role you may have played in conveying or reinforcing the President's stark message to the Ukrainian President. These reports have also raised significant questions about your efforts to press Ukrainian officials to change the management structure at a Ukrainian state-owned energy company to benefit individuals involved with Rudy Giuliani's push to get Ukrainian officials to interfere in our 2020 election," it adds.

The latest development comes just hours after the three chairmen also issued a subpoena to Lev Parnas and Igor Fruman, two associates of Giuliani who were arrested late Wednesday at Dulles International Airport. The pair, who were released on bail Thursday, were arrested on charges that Parnas, Fruman and two other persons funneled $1 million in illegal donations from foreign nationals to unspecified political campaigns. Parnas and Fruman are due to return to court on October 17 in New York.

US House Speaker Nancy Pelosi formally announced the House's impeachment proceedings against Trump in late September, days after reports surfaced regarding a July 25 phone call between POTUS and Ukrainian President Volodymyr Zelenskyy, which was at the center of a whistleblower report that the Trump administration had attempted to keep under wraps from Congress.

Multiple subpoenas have been issued by the House, of which many have been rejected by summoned individuals. Most recently, the White House doubled down on its stance, saying that it has no intention to cooperate with the inquiry.