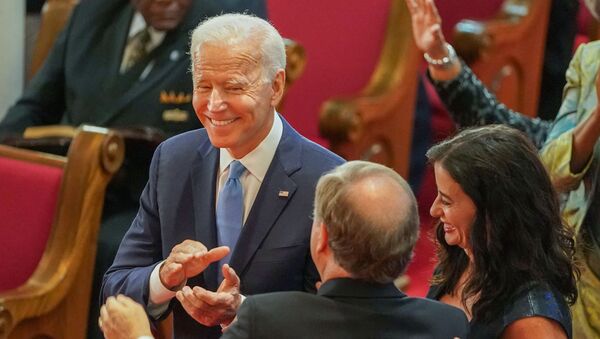 As the impeachment inquiry launched by House Democrats against US President Donald Trump heats up, additional Democratic figures including former US President Jimmy Carter are joining the many demanding that the incumbent president be impeached.

Former vice president and 2020 Democratic hopeful Joe Biden has for the first time publicly called for the impeachment of US President Donald Trump.

During a Wednesday campaign event, Biden launched an attack against Trump, accusing him of "impeachable acts" and stating that in order to preserve "our constitution, our democracy, our basic integrity, he should be impeached."

Joe Biden: "With his words and his actions, President Trump has indicted himself ... Trump has violated his oath of office, betrayed this nation, and committed impeachable acts. To preserve our Constitution, our democracy, our basic integrity, he should be impeached."
Via ABC pic.twitter.com/cFz0tXBOjZ

​The president immediately responded, tweeting that Biden's declaration was a result of his "failing campaign".

So pathetic to see Sleepy Joe Biden, who with his son, Hunter, and to the detriment of the American Taxpayer, has ripped off at least two countries for millions of dollars, calling for my impeachment - and I did nothing wrong. Joe’s Failing Campaign gave him no other choice!

On September 24, House Democrats launched an impeachment inquiry into Trump’s July 25 telephone call with Ukraine President Volodymyr Zelenskyy. The inquiry was initiated after a whistleblower sent a complaint to Congress asserting that Trump threatened to withdraw military aid to Ukraine if Kiev failed to probe the Bidens.

Democrats have argued that the alleged quid pro quo and the move by Trump to solicit a foreign power to investigate a political rival violate US law. Trump described the allegations as a "political witch hunt" to reverse the outcome of the 2016 US presidential election, and published what is said to be the full transcript of his telephone call with Zelensky.

Joe Biden, who served as vice president under US President Barack Obama, is running for the Democratic nomination in 2020 to defeat Trump. While for a long time maintaining a comfortable lead at the top of the Democratic race, polls now suggest that Biden's campaign is beginning to falter in the wake of the rise of Senator Elizabeth Warren, making the current Democratic race an effective three-way competition between Biden, Warren, and Vermont Senator Bernie Sanders.