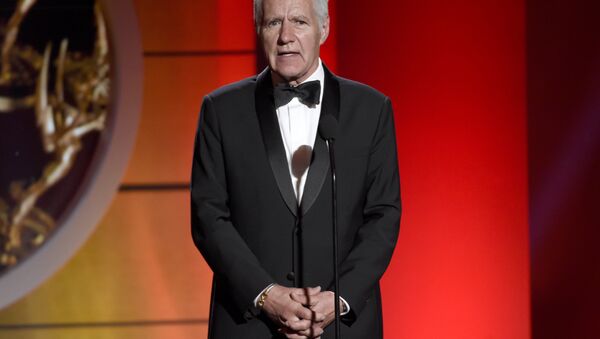 © AP Photo / Photo by Chris Pizzello/Invision/AP, File
Subscribe
International
India
Africa
Alex Trebek says he will stay on screen as long as he can, but noted that he is aware that he will not be able to stay for long. According to the celebrated US game-show host, the prospect of death does not scare him.

Trebek, the 35-year US TV host of the ‘Jeopardy!’ quiz show, opened up about his body’s pancreatic cancer, admitting that the disease will likely end his career and his life.

Speaking in an interview with Canada's CTV, Trebek vowed to remain on the job for as long as his skills “do not diminish,” but admitted that cancer takes it toll.

"I will keep doing it (the show) as long as my skills do not diminish, and they have started to diminish," he said.

The renowned host disclosed that chemotherapy gives him sores in the mouth which make it difficult to enunciate words. He noticed that he was slurring words on camera, acknowledging that if he notices it, other people in the audience must also notice it.

"I notice those things and I'm sure there are observant members of the television audience who notice also," he said. "But they're forgiving."

His contract runs until 2020, CBS News says, and it will be up to him to decide whether to step down or stay. While he admitted that support from those around him keeps him going, he knows it will not last.

"When I feel like my skills have diminished to the point I notice and am bothered by it, I notice now, but I'm not as bothered by it because all of the people around me are saying, 'No it's okay.'" he said. "But there will come a point when they will no longer be able to say, 'It's okay.'"

Trebek said he regrets going public about cancer earlier as many suffering from similar conditions turn to him to find support and reassurance, even as he fights his own disease.

A lot of people are coming to me and looking for help, reassurance -- and that's tough," he said. "I don't know if I'm strong enough or intelligent enough to help alleviate some of that despair, so it's tough on me."

The American Cancer Society puts a survival rate of over five years for all forms of pancreatic cancer at only 9 percent. Earlier this year, Trebek disclosed that he had been diagnosed with a stage 4 cancer.

In the interview, the 79-year old Trebek said that he is aware his life is nearing its end, but doesn’t fear death.

"The thought of the pancreatic cancer does not frighten me," he said. "I'm 79 years old. So, hey, I've lived a good life, a full life, and I'm nearing the end of that life. I know that."

Trebek began his career as a TV host in 1963. In 1984 he succeeded Art Fleming as the host of 'Jeopardy!' and remained its host for 35 years. He played himself as the 'Jeopardy!' host in over 20 movies and TV shows, including animated shows ‘The Simpsons’ and ‘Family Guy.’ Throughout his career, he took other host jobs, including 2017’s ‘Game Changers,’ in which he acted both as host and producer.