Trump Worries About Legacy, Does Not Want Impeachment ‘On His Resume’ – Reports 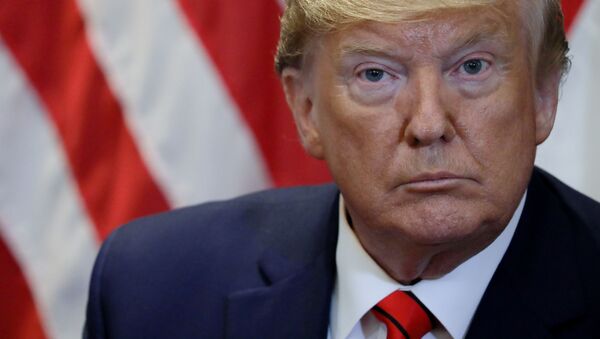 Before the recent impeachment inquiry against Donald Trump, such proceedings have been initiated three times in US history against presidents Andrew Johnson, Richard Nixon and Bill Clinton, with none of the incumbents removed from office in the end.

In a phone call with House Republicans this Friday, Donald Trump said that he does not want to be impeached, as it would have a negative impact on his legacy, but remained hopeful that even if the Democrat-controlled House of Representatives goes through with the impeachment inquiry, there would be a silver lining, Axios reported, citing sources that took part in the call.

According to media, sources close to Trump note that he is "not in denial" that there is a big chance that the House of Representatives could impeach him if the House Committees provides sufficient evidence of him compromising US national security and the election system to the Judiciary Committee, and the House votes to support the impeachment case. On the other hand, Trump's advisors note that it is unlikely that the US Senate would then vote to remove the president from the office.

Speaking about the possible consequences of the House of Representatives supporting impeachment, Trump reportedly noted that "you don't want it on your resume" but stated that this would potentially help Republicans win back the House and improve House Minority Leader Kevin McCarthy's chances of becoming House Speaker.

"But it's going to make Kevin speaker," Trump reportedly said in the phone call.

The remarks came following reports that Trump's impeachment by the House of Representatives would potentially hurt Democrats seeking reelection in swing districts and strengthen Trump's supporter base.

In a recent Tweet, Trump suggested that House Speaker Nancy Pelosi, who announced the impeachment inquiry against Donald Trump on 24 September, and House Intelligence Committee Chairman Adam Schiff who handled the anonymous complaint regarding the Ukraine call, should be "impeached" instead of following their "collusion" on the matter.

The impeachment inquiry against Donald Trump started with a whistleblower's complaint after his phone conversation with the Ukrainian President Volodymyr Zelensky on 25 July, where the two presidents discussed the firing of Viktor Shokin, a state prosecutor investigating the Burisma energy company, linked to Joe Biden's son Hunter Biden, with Biden later admitting that he had played a role in stopping the prosecution. A second whistleblower then came forward, claiming that he possesses information about the negotiations between Washington and Kyiv, according to the inspector general of the intelligence community.

There have been three initiated impeachment attempts in 200 years of the US history, with none of them resulting in the removal of the incumbent US president from office. The latest impeachment inquiry was initiated against Bill Clinton concerning the Monica Lewinsky case. However, there were not enough votes in the Senate to remove him from office.