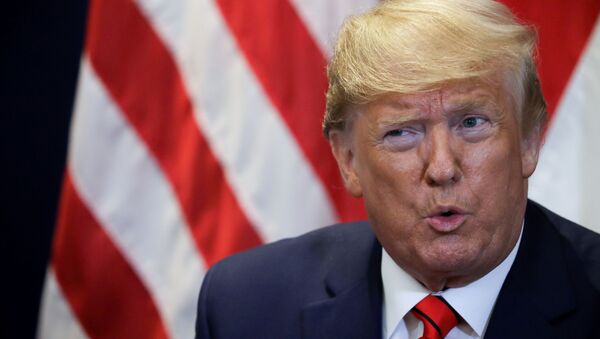 © REUTERS / Jonathan Ernst
Subscribe
US President Donald Trump launched his 2020 campaign in June with a mega-rally in Orlando in the state of Florida, during which he boasted about how tough his administration has been on Russia in terms of imposing sanctions and providing alternative energy sources to Europe.

US Senator and 2020 Democratic presidential hopeful Amy Klobuchar has called President Donald Trump a "global gangster" in an interview on CNN’s “State of the Union".

"I think this is impeachable, that the case should be heard by the House and it should come over to the Senate. Now I don’t know what counts they’re going to have or how they do this, but my focus is on the fact that you’ve got a president that is acting like a global gangster. He is basically going to one leader after another, trying to get dirt on his political opponent", she said.

Klobuchar added that she considers this a violation of the US laws.

"I consider it a violation of the election laws. You have the smoking gun document, but now you’re getting reports of another whistleblower that is going to back-up what the first whistleblower said. So I am really, really focused on getting the evidence out for the American people and calling on our Republican colleagues to take this on in a serious matter, to put the country in front of their own partisanship as we get this very serious case that I believe will come over from the House”, she noted.

She continued by saying that the situation reminds her of Watergate.

"You had a president that was paranoid, and an election was coming up, and he wanted to get dirt on his political opponents, and he sent out a group to break into a file cabinet in the DNC headquarters. Instead of this guy, he’s decided to use his clout with world leaders and try to do it on a global basis and then when they get caught. What do they do instead they try to hide it on a super-secret server and have the information there? They didn’t have those back then in Watergate, but it is the same kind of thing. That is what we’re dealing with here, and people need to think of it that way”, she stated.

The US president found himself in hot water after a whistleblower sent a complaint to Congress, alleging that Trump had pressured Zelensky to investigate possible corruption by 2020 Democratic presidential candidate Joe Biden and his son Hunter, also implicitly threatening to withhold US military aid to Ukraine. Following the complaint, Democrats launched an impeachment inquiry into Trump’s 25 July telephone call with Ukrainian President Volodymyr Zelensky.

Trump has denied the allegations, calling them another attempt at a political witch hunt to reverse the outcome of the 2016 US presidential election, going on to publish the transcript of the telephone call with Zelensky.