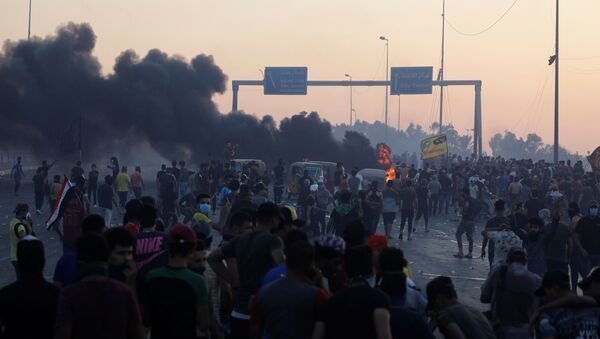 Waid news agency reported earlier in the day that about 113 people were killed in anti-government protests that have been sweeping Iraq since 1 October, while over 4,100 people were injured.

Iraq's Interior Ministry spokesman Major General Saad Maan has said in a statement that 104 protesters and eight security members have been killed in the mass protests, with more than 6,000 people injured.

According to the spokesman, 51 public buildings and eight political party headquarters have been torched by protesters.

The spokesman continued by saying that no Iraqi government forces had fired directly at protesters during the violence this week.

Earlier in the day, Iraqi Prime Minister Adel Abdul Mahdi agreed to proceed with the implementation of a plan involving cabinet reshuffles amid ongoing protests in the country.

The statement comes after the Iraqi Observatory for Human Rights reported that about 450 people were detained during the ongoing protests that started in Iraq on 1 October, with about half of them already having been released.

Baghdad and other Iraqi regions have been witnessing mass protests since Tuesday. The demonstrations turned violent as security forces used live ammunition, water cannons, and tear gas to disperse the protesters. The demonstrators are calling for the government to be dismissed. Moreover, they are demanding jobs, economic reforms, and that corruption be tackled.