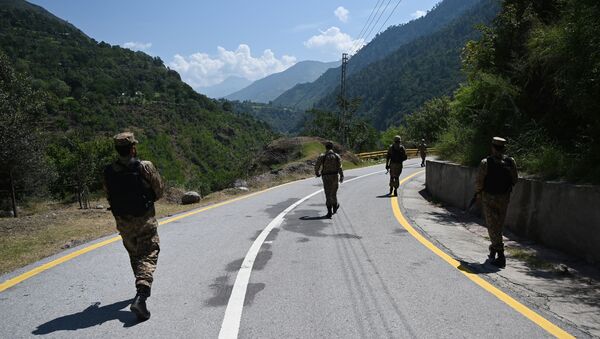 © AFP 2023 / AAMIR QURESHI
Subscribe
International
India
Africa
New Delhi (Sputnik): The Pakistan Army's spokesperson found himself at the epicentre of a troll-fest after Twitter users spotted a spelling gaffe in his post on Kashmir.

Pakistan Army spokesperson Asif Ghafoor made an open appeal to Twitter trolls when he misspelt the word vein in the term 'jugular vein' as 'vain' while quoting Army Chief Qamar Javed Bajwa's speech on the current situation in the disputed region of Kashmir.

It didn't take social media users long to spot the spelling error, and they flooded his Twitter account with all sorts of reactions:

The last time I had corrected your Latin. This time please allow me to correct your English. It's - jugular vein - and not "vain"...
Even the auto correct prompts correctly the moment one types - jugular.
So this must have been typed out of ignorance of the correct spelling. pic.twitter.com/c7u56D1FbM

​Another user asked Pakistan to focus on its citizens first.

Look what have you done to your awaam!
Kashmir, Kashmir kar rahe ho.. try focusing on your citizens ..first. pic.twitter.com/26gHYlJNaw

Some Twitter users gave spelling lessons to the Pakistan Army spokesperson and even stated the differences between the meanings of vain and vein.

Ever since India stripped the restive Jammu and Kashmir state of special status by amending Article 370 and 35A of the constitution in August, there has been a war of words and diplomatic offensives from both Islamabad and New Delhi.