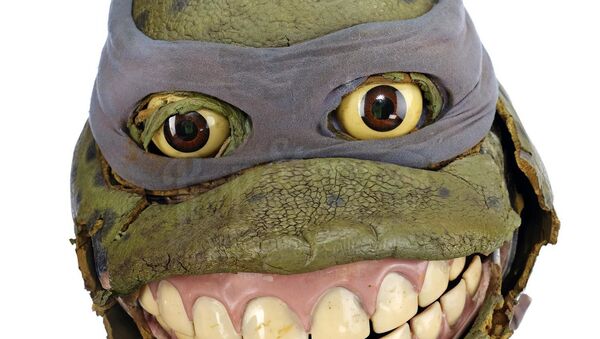 © Photo : Prop Store
Subscribe
International
India
Africa
A decaying costume of a not-so-teenage-but-definitely-mutant ninja turtle that can give you nightmares is now available for purchasing – if you truly wish to have a fully-immersive Halloween experience.

The Leonardo suit, worn by Mark Caso in Stuart Gillard’s finale to the 1990s Teenage Mutant Ninja Turtles trilogy, is up for grabs in a Prop Store auction – starting at £5,000 ($6,115).

You can buy this rotting, screen-used TMNT III Leonardo suit if you want. pic.twitter.com/f7no7LtGwl

This costume was last seen on the set of Teenage Mutant Ninja Turtles 3, better known as "not the Ninja Turtles sequel with Vanilla Ice in it, the other one" – in literally one hell of a state. The rubbery bodysuit looks like it spent the past two decades in the same sewer as the turtle team—its faded blue mask stretched above disintegrating eyelids and a ghoulish grin full of cracked resin teeth.

“Both the body and head of the costume show substantial breakdown to the foam latex elements and require restoration,” the Prop Store item description reads. But who will restore our nerves after seeing this abomination remains unknown.

Netizens couldn’t help but leave some of the other props that didn’t age well in the replies.

Also, Hoggle the Goblin from ‘The Labyrinth’ is currently rotting away in unclaimed baggage in Scottsboro, Alabama.
No shit, google it. pic.twitter.com/4dA8AwCAWu

Want to see some real horror look up what happened to poor Falkor pic.twitter.com/8bGN3yFohq

Foam latex just kind of dries up and falls apart over time pic.twitter.com/V9FLu0qDgq