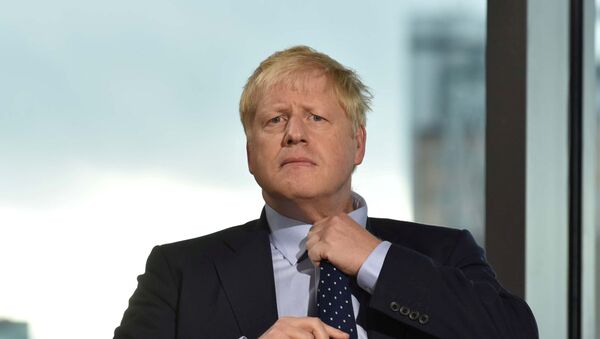 Charlotte Edwardes, the journalist who made the claims, worked in the Spectator when Boris Johnson was the magazine’s editor. The accusations coincide with the second anniversary of the #MeToo movement and put additional pressure on Johnson as he battles with opposition lawmakers over the future of Brexit.

Prime Minister Boris Johnson has rebuffed allegations of inappropriately touching his female colleague while working together at the Spectator magazine.

Charlotte Edwardes, a British journalist and The Times’ new columnist, wrote in her first column for the newspaper that Johnson had groped her thigh at a lunch at the Spectator magazine’s office in the late 1990s or early 2000s.

“Under the table, I feel Johnson’s hand on my thigh,” she recounted. “He gives it a squeeze. His hand is high up my leg and he has enough inner flesh beneath his fingers to make me sit suddenly upright.”

Edwardes said she discussed this with another young woman who sat on Johnson’s other side, and she admitted he did the same to her. The journalist did not mention the woman’s name.

“The allegation is untrue,” a No. 10 spokesperson said in a statement.

Boris Johnson, who was married to now-estranged wife Marina Wheeler at the time, was asked whether it was true during a TV interview at the annual Conservative conference in Manchester and responded: “No.”

Edwardes stood by her account, tweeting on Sunday night: “If the prime minister doesn’t recollect the incident then clearly I have a better memory than he does.”

If the prime minister doesn’t recollect the incident then clearly I have a better memory than he does https://t.co/pbcLJThkqP

The Guardian reported, citing Downing Street sources, that the prime minister was “furious” at the claim in an off-the-record conversation; the insiders also described it as “bollocks” and “nonsense”.

Speculation has emerged that Mary Wakefield, the wife of Johnson's senior adviser Dominic Cummings and The Spectator's commissioning editor, could have been the other woman in the ‘touching’ story. Wakefield, however, denied being the alleged victim: “Boris was a good boss and nothing like this ever happened to me. Nor has Charlotte, who I like and admire, ever discussed the incident with me.”

Reactions to the claims varied significantly among politicians. “I entirely trust what she has to say,” Matt Hancock, the health secretary who ran against Johnson for Conservative Party leadership, said of the accuser, describing her as “trustworthy.”

Amber Rudd, the former work and pensions secretary who resign earlier this month protesting against Johnson's Brexit strategy, tweeted: “I agree with @MattHancock”.

Chancellor of the Exchequer Sajid Javid said he has “full faith” in the prime minister and does not doubt his denial “for a second”.

“It is unclear whether Boris Johnson was an MP at the time of the alleged incident, but what is clear is that a man who feels entitled to use his position of power to sexually harass women is not fit to be an MP, let alone Prime Minister,” she wrote.

I've written to Sir Mark Sedwill, Cabinet Secretary, & James Cleverly, Conservatives Chair calling for a thorough investigation into allegations of misconduct by the PM @BorisJohnson in the @thesundaytimes. Denial is not a reason not to investigate - #MeToo happened for a reason pic.twitter.com/WBdzMZ3jtd

Incidentally, these are not the first potentially damaging accusations regarding Johnson's relations with women. A recent investigation by The Times alleged that he had given preferential treatment to his female friend, an American tech entrepreneur, during his time as London mayor — including privileged access to high-profile overseas trade missions funded by taxpayers and thousands of pounds in sponsorship grants to her projects. Reacting to suggestions that he had declared no conflict of interest there, Johnson said “there was no interest to declare”.

The allegations surfaced at an unfortunate time for Boris Johnson, who is going through arguably the toughest period of his political career. In the past few weeks, Johnson was confronted by opposition MPs over his divisive Brexit language, blocked from taking Britain out of the EU without a deal on 31 October, and saw his decision to temporarily shut down parliament reversed by the country's supreme court.

It has emerged that the opposition is looking into further steps to avert a no-deal, and is allegedly meeting today to plot a way to force the prime minister to request a Brexit extension as early as this weekend.

The most dramatic step would be to hold a vote of no confidence in Johnson's government, and Stewart Hosie, an MP for the pro-Remain Scottish National Party, said over the weekend that such a vote could be held next week.