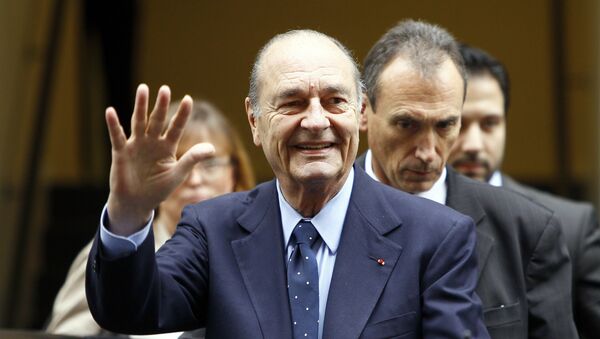 © AP Photo / Francois Mori
Subscribe
France’s opposition to the US military invasion of Iraq put Washington and London at odds with Paris and deprived them of a desperately-needed UN Security Council resolution to legitimize the incursion.

Now, new allegations from a former UK spy claim that former French President Jacques Chirac opposed the Iraqi War in exchange for millions of dollars sent his way by the former president of Iraq, Saddham Hussein, according to the Daily Mail.

Sir Richard Dearlove, a former head of MI6, made his statement in response to obituaries for the French leader that praised the latter for staying out of the US-UK coalition in Iraq.

According to Dearlove, Chirac’s motivation was not political foresight, but rather a hefty $6+ million lump sum sent from Hussein’s personal funds and passed to Chirac via intermediaries.

According to the Daily Mail, the UK and the US spied on Chirac to get “reliable intelligence” that Chirac received millions from Hussein between 1995-2002.

“He [Chirac] had this questionable relationship with Saddam Hussein. It raises a lot of questions as to what his motives were for opposing the UN Resolution in the build-up to the invasion,” Dearlove said. “It was a dimension which at the time was politically worrying – Chirac had a longstanding relationship with Saddam, which was not state to state, it was personal.”

Before the US invasion of Iraq, Chirac was in league with Germany and Russia to oppose the war and vowed to add his veto to a UN Security Council resolution that was supposed to legitimize the war. Without the resolution, the US and the UK had to attack Iraq on their own. Chirac’s staunch opposition to the invasion was met with criticism by Washington, and many US restaurants chose to rename their “French fries” to “freedom fries.”

“History has shown who took the right decision,” she said, without commenting on Dearlove’s allegations.

Former UK Foreign Secretary, Sir Malcolm Rifkind, speculated that Chirac had other reasons to oppose the war, besides an alleged bribe.

“Regardless of personal reasons, Chirac would have opposed the war because the French public opposed it so vehemently,” he said, according to the Mail.

Jacques Chirac died on 26 September 2019. His burial ceremony is scheduled for 30 September, Monday.