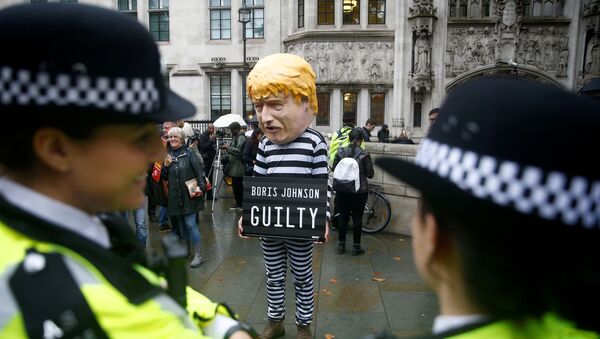 The UK Parliament will reconvene on Wednesday after the Supreme Court ruled on Tuesday that its suspension was unlawful. Prime Minister Boris Johnson responded by saying he disagrees strongly with the ruling but respects the court's decision.

Boris Johnson's Attorney General, Sir Geoffrey Cox, has been accused of advising Boris Johnson that the suspension of parliament was lawful, according to an anonymous leak to Sky News. According to Sky, Boris Johnson was told that "any accusations of unlawfulness or constitutional outrage were motivated by political considerations."

Last week, Scottish Courts released the text of conversations between cabinet ministers, with certain redacted sections. Sky News subsequently received a copy of the redacted sections, which revealed Cox saying that prorogation was legal and anyone disputing it was politically motivated.

The redacted conversation reads: "The attorney general said that his advice on the question of the law is that this was lawful and within the constitution."

"Any accusations of unlawfulness or constitutional outrage were motivated by political considerations. The proposal was compatible with the provisions of the NIEFF 2019."

We now find out via @SkyNews News that #BorisJohnson's Attorney General Sir Geoffrey Cox said prorogation was lawful. Geoffrey Cox cannot now be the one thrown under the bus. This is Boris Johnson's crisis & it is his actions which have been called unlawful. #Johnsonmustresign pic.twitter.com/O3oi80XPJt

​In response to rulings by the Supreme Court on Tuesday, Boris Johnson said he would "respect" the ruling despite strongly disagreeing with it.

We fought the law and the law won. pic.twitter.com/i5yTSmgUlK

The Supreme Court found on Tuesday that the prorogation was in fact unlawful after eleven judges unanimously found that it had the effect of frustrating parliament.

Britain’s most senior judge, Lady Hale, said that the advice Johnson gave to the Queen was unlawful and said: “Parliament, as elected representatives of the people, has a right to a voice... the effect on our elected democracy was extreme.”

They court also found that the prorogation was "void and of no effect," which was met with an immediate call by House Speaker John Bercow to recall parliament on Wednesday 25 September.

The motion was brought to the Supreme Court after a Scottish Court ruled that Johnson's prorogation decision was unlawful as it was "motivated by the improper purpose of stymieing parliament" rather than the reason officially given by the government.

The Prime Minister had originally claimed that the five-week suspension of parliament was to make way for a Queen's speech to outline the government's legislative agenda.