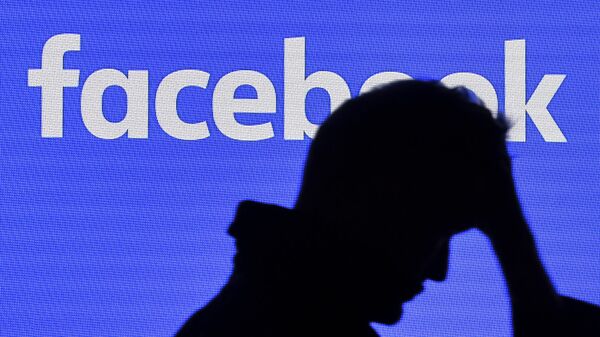 One political journalist caught the attention of thousands of netizens after applying a xenophobic framework to a Ukrainian-run, pro-Trump Facebook page that he says disseminates false information and seeks to use its following to interfere in the US’ upcoming 2020 presidential election.

Judd Legum, the founder of the Popular Information newsletter and the former outlet ThinkProgress, fanned the flames and stoked age-old fears of foreign influence on Monday as he highlighted a lesser-known fact about the “I Love America” Facebook page and affiliated social media brands.

“A massive Facebook Page called ‘I Love America’ — which has 1.1 million followers — is actually run by Ukrainians,” Legum revealed to his followers that morning. “Recently, the page has started pushing caustic pro-Trump propaganda.”

The journalist went on to accuse the prominent, Ukrainian-run page of being just one cog in a greater Ukrainian Facebook network that has a reach greater than the Washington Post and the New York Times’ pages combined on the social media platform.

Legum drew comparisons between the popular page and the Internet Research Agency (IRA), a meme-focused social media organization referenced in the Mueller Report as one of the first methods of Russian interference into the 2016 presidential election. Despite the accusations of the account and its memes’ influence on American adults’ votes in the election, the IRA is estimated to have only garnered 10,000 followers on its most popular platform prior to the 2016 election: Instagram.

The journalist, who didn’t miss an opportunity to plug his newsletter in every tweet, noted that "I Love America" publishes similar memes and pro-Trump propaganda to the IRA, but also taps into Facebook users’ softer sides with pictures and video clips of “cute dogs.” How sinister!

Unfortunately for the Popular Information founder, Facebook was quick to dismiss his claims.

“Facebook tells me this network of Ukrainians pretending to be American, pushing pro-Trump propaganda DOESN'T VIOLATE ITS POLICIES,” Legum, clearly displeased, announced in his fifth tweet.

“The company won't hold itself accountable. That's why I'm doing this work,” he claimed.

It remains unclear what work Legum is addressing and for what he claims Facebook is refusing to accept accountability. Rather than explain, he chose to plug his website - for the fifth time.

After last year’s series of congressional hearings, in which Facebook was dragged and grilled by members of the US Congress who are probably unfamiliar with Instagram and struggle to differentiate between Facebook and Twitter, the social media giant was forced to make some changes to be transparent with page operations and explain where information on them originates.

Case in point: the “Page Transparency” section, which is public and readily available on the immediate right-hand side when one views the Facebook page from their desktop, offers information on when the page was created and the home countries of its managers. The section can be viewed under the page’s photos when using a mobile device. 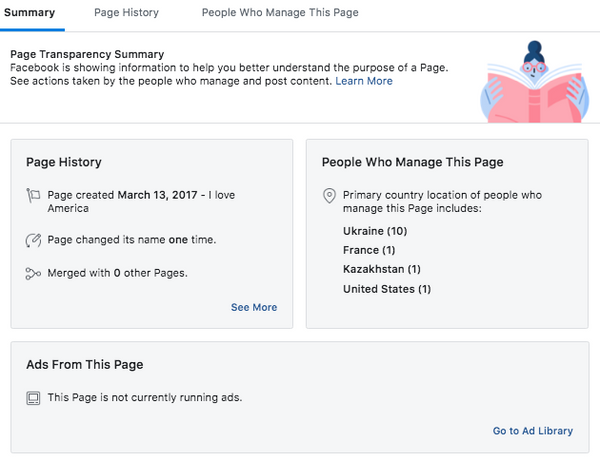 Rather than inform and educate his followers and other Americans who he presumably wants to make informed decisions, Legum saw this as a perfect opportunity to reignite fears of some unknown, but definitely foreign, individuals having the nerve to lie on the internet.

Never mind the fact that Election Day has yet to become a national holiday to ensure the working class can cast their ballots without stress. Forget about redistricting and other forms of voter suppression happening to targeted communities domestically. Oh, and don’t think about teaching less-informed people about ways to identify and avoid malicious and agenda-based groups.

Instead, Western media’s focus falls on these unnamed individuals on Facebook who are identified only by their nationality. Meanwhile, those incited by the narrative will more than likely miss out on announcements and policy changes relevant to digital literacy and safety.

Just hours after Legum drew attention to the page owners’ location, “I Love America” has lost around 200,000 followers and continues to be flooded with profanity-laced reviews that cite the journalist’s work.

The owners of the page appear to be ignoring the controversy, which is probably further assisting their Facebook exposure. From memes to videos, the Ukrainian-run page is continuing to share its colorful, pro-Trump content amid the US-Ukraine controversy.