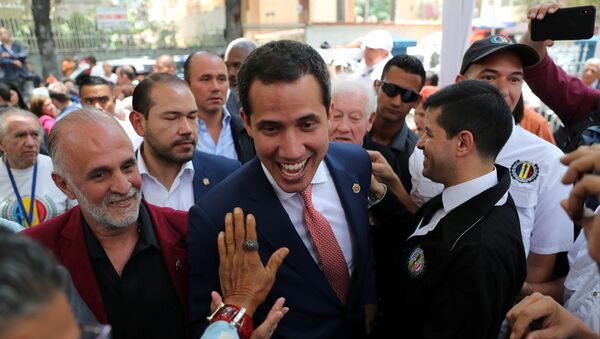 On 13 September, the Venezuelan Prosecutor General’s Office opened an investigation into Guaido's suspected links to Los Rastrojos, citing photos, published by the Spanish newspaper El Pais, which showed the opposition leader together with the leaders of the gang. According to prosecutors, it was the drug cartel that helped Guaido to cross the Colombian-Venezuelan border despite a ban, imposed on the opposition leader by Caracas. On Friday, Rodriguez said that the Venezuelan authorities had detained a gang member, known as Nandito, who confirmed Los Ratrojos’ involvement in transporting Guaido.

"Imagine that the Colombian municipality mayor embraced the people [from Los Rastrojos], known as Menor, Nandito and Poor Boss. They are wanted by the whole world, including Interpol! These people conveyed Juan Guaido to the escort [of Colombian President] Ivan Duque. They drove up to the presidential helicopter at the stadium in Puerto Santander", Rodriquez said on Friday.

From Maduro’s point of view, it was the Colombian president's idea to use Los Rastrojos to transport Guaido to the Colombian-Venezuelan.

"That was an order of the Colombian government to use Los Rastrojos to relocate Guaido. Hopefully, the Congress and other agencies will launch an investigation into this fact", the Venezuelan president noted.

Last week, Guaido told the radio broadcaster Blu that he had taken hundreds of photos with various persons during a humanitarian concert in the Colombian border city of Cucuta and did not know that some of these people had links to Los Rastrojos.

Venezuela has been mired in a severe political crisis since late January when US-backed opposition leader Guaido proclaimed himself interim president in a bid to oust Venezuelan President Nicolas Maduro from power. Maduro has accused Guaido of being a US puppet, working with Washington to orchestrate a coup so that the United States can control Venezuela’s natural resources.