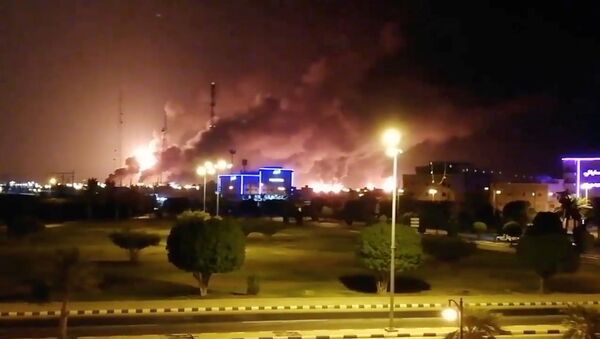 © REUTERS / VIDEOS OBTAINED BY REUTERS
Subscribe
Not content to let US President Donald Trump back away from a fully fledged war with Iran, some mainstream media figures are trying to frame Trump’s election for sanctions instead of airstrikes as a sign of weakness.

With the Gulf crisis in danger of exploding into war between Iran, the US and its allies, the Trump administration seems to be stepping back from the kind of ultra-militant posturing that nearly caused a war early in the summer. However, some in the mainstream media, which opposes Trump at all costs, are now trying to shame him into one.

Question: does this mean the president is again balking at military retaliation? https://t.co/8px0PGdgVL

​After Trump tweeted on Wednesday that he would be further increasing economic sanctions against Iran, CNN anchor Jim Sciutto replied with a carefully worded question: “does this mean the president is again balking at military retaliation?”

Sputnik reported on Tuesday that many military leaders in the US were advising patience and restraint in order to accurately determine the nature and origin of the attack on Saudi Aramco’s oil facilities at Buqayq and Khurais in Eastern Province on Saturday.

The Yemeni Houthi movement, locked in combat with an invading Saudi-led coalition since 2015, has claimed responsibility for the attacks, describing in detail how they carried them out. The attack fits a pattern of Houthi strikes against Saudi oil industry targets, which form the heart of the kingdom’s economy, and airstrikes with drones, and it follows through on previous threats made last month.

However, the Saudi-US analysis of the attacks is not yet complete. Iranian complacency with the Houthi strike hasn’t yet been demonstrated, much less actual guilt on the part of Tehran for having pulled the trigger. Nonetheless, South Carolina Senator Lindsey Graham, whose favorite perennial foreign policy flex is calling for Tehran’s annihilation, cried out on Twitter that the attack was “an act of war” and demanded it was “imperative we take decisive action” against Iran to teach them a lesson.

​The purpose of Sciutto’s question is to frame Trump’s choice as between showing strength by ordering an airstrike, which seems to be the obvious decision for any red-blooded American - or weakness by “balking” at that option. That’s why Sciutto requires specific confirmation that Trump isn’t choosing that course of action.

Graham likewise derided Trump’s decision to back down earlier this year following the shootdown of a US spy drone near the Iranian border as having shown a “sign of weakness.” Trump called off the June strike just minutes before it was set to begin, believing the resulting deaths would not be a proportionate punishment for the loss of a $200 million Global Hawk.

Indeed, one of NBC’s political commentators, William Arkin, famously quit in January, denouncing the network in his resignation letter as a “cheerleader for open and subtle threat mongering,” full of people who “accept that a state of perpetual war” is a necessity.

Economic sanctions, by contrast, aren’t flashy; they don’t generate prime-time news revenue, and they don’t connote American-style machismo. They’re presented as a more peaceful solution than war - and no doubt they are, as no bombs are flying as a result - but economic sanctions are no less deadly for that. Their purpose, as Richard Nixon said of sanctions on Chile in the early 1970s, is to “make the economy scream,” and force the adversary into compliance to end the torturous deprivation of life’s necessities.

And killing they are: a report in Foreign Policy last month noted that Iranian cancer patients are dying as drug prices skyrocket and Iranian doctors lose access to key chemotherapy drugs and radiation treatments.

​The same day, Washington Post columnist David Ignatius hailed the decision, telling MSNBC that Trump had “put more umph” back into “the credibility of American power,” noting that most traditional Washington commentators agreed with him.

Indeed, Fox News’ Jeanine Pirro praised Trump’s “swift, decisive action,” noting, “We finally have a man who knows the difference between right and wrong and good and evil, and it makes us proud. Finally.”

Both commentators clearly expressed their disdain for former US President Barack Obama’s refusal to attack Syria, even after Damascus supposedly crossed Obama’s 2015 “red line” by using chemical weapons. Sputnik and numerous other outlets have repeatedly disproven the claim that the Syrian Arab Army was behind any chemical weapons released.

When Trump backed away from his “fire and fury” rhetoric against the Democratic People’s Republic of Korea (DPRK) and began negotiating with leader Kim Jong Un, the mainstream media once more leapt to the defense of war, seizing every opportunity to suggest that Trump’s attempt to resolve the Korean crisis by negotiating denuclearization instead of flatting Pyongyang - as the US did in the 1950-53 war - is a fool’s errand. The MSM has received support in this anti-peace crusade from think tanks like the Center for Strategic and International Studies and the Middlebury Institute of International Studies at Monterey, which regularly produce suggestively framed satellite images purporting to show Kim violating his agreements with Trump in various ways.

Late last month, the sneering continued. MSNBC’s Joe Scarborough blasted Trump as “being made a fool of every day” by Kim for his unwillingness to discard progress made thus far due to new short-range missile testing by the DPRK.

It is shocking how easily Donald Trump got played by the most tyrannical communist leader in the world. And just as stunning that Republicans across America have sat back and happily watched it happen.
The party of Reagan?
Not even close. https://t.co/3Eu60IsgG2

​If one thing is constant in the mainstream media, it is a love for war and a willingness to cheer on the harshest response to a given conflict. Trump can be almost certain that on the day he does send in the jets, the MSM will be there to praise the decision as “presidential.”