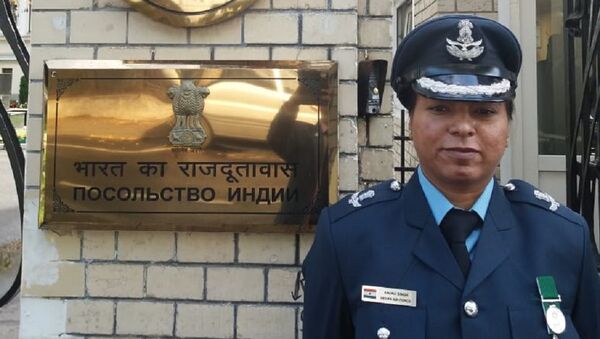 New Delhi (Sputnik): India has created history by appointing a woman air force officer as the first woman military diplomat in any Indian mission in the world. Wing Commander Anjali Singh of the Indian Air Force (IAF) has been appointed New Delhi’s Deputy Air Attaché at the Indian Embassy in Russia.

An aeronautical engineer by qualification with 17 years of experience in the Indian Air Force, Wing Commander Singh, 41, took charge of her diplomatic assignment last Tuesday (10 September).

In a Tweet, the Indian Embassy in Moscow said: “she enjoys the distinction of being the first female Indian Armed Forces Officer to be posted as a military diplomat in any of the Indian missions abroad.”

Wing Commander Anjali Singh joined @IndEmbMoscow on 10th Sep as the Deputy Air Attache. She enjoys the distinction of being the first female Indian Armed Forces Officer to be posted as a military diplomat in any of the Indian missions abroad. @IAF_MCC @MEAIndia @WIONews @ANI pic.twitter.com/hOqcbPQlJ2

​Netizens welcomed the government’s announcement as an encouraging sign of the empowerment of Indian women in different spheres of life.

This is real women empowerment...

Really great to have that honour of being appointed in Russia. Indo-Russian relationship is very strong since six decades.

Wing Commander Anjali Singh hails from the Indian state of Bihar and as an IAF officer has served with various squadrons of the force across India.

Before being posted to Moscow, Singh served with an IAF unit in the Indian State of Rajasthan.

India has over 100 defence attachés (DAs) posted across the globe, most of them males. Some countries like the United States, the United Kingdom and Russia have representatives from all three armed forces -- the Army, Navy and the Air Force.

“Defence Attaches act as the main interface with the host country’s military authorities, while also assisting in security and protocol tasks and keeping an eye on the available military technology,” Indian daily the Times of India quoted an official, speaking on condition of anonymity, as saying.

The appointment of Wing Commander Singh as Deputy Air Attache at the Embassy in Moscow is seen as a significant move in defence and government circles, especially in the light of Indian acquisition of five squadrons of S-400 missile systems from Russia.