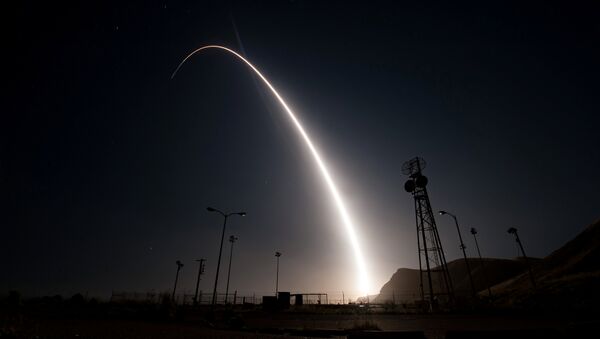 Aerojet Rocketdyne, a relatively new US defense contractor, has scored parts of several big contracts in the burgeoning US missile program, including developing a hypersonic missile and the Ground Based Strategic Deterrent (GBSD), the next generation of nuclear ballistic missiles.

In the race to build the next generation of ground-based missile systems, Aerojet Rocketdyne is poised to profit bigtime from the bevy of contracts being handed out by the Pentagon. At the US Air Force Association's Air, Space and Cyber Conference in National Harbor, Maryland, on Monday, the rocket engine maker announced it would be working with other defense firms on developing a Mach 5-capable hypersonic cruise missile, as well as the next generation of intercontinental ballistic missiles.

Retired Army Col. Steve Warren, an Aerojet spokesperson, told Military.com for a Monday story that the company was working on “taming the physics” of a powerful new engine for a hypersonic missile that can fly so fast, enemy air defense will scarcely be able to keep track of it, much less shoot it down.

The Pentagon purportedly has nine different hypersonic missile programs in development right now in a bid to catch up with Russia and China, both of which have already demonstrated operational models of the superfast weapons. Only in June did the US Air Force test a hypersonic weapon for the first time, firing off a dummy AGM-183A Air-Launched Rapid Response Weapon (ARRW) built by Lockheed Martin.

Warren said perfecting such a weapon is the US Defense Department’s “top technical priority.” That’s become all the more true since the US withdrew from the Intermediate-Range Nuclear Forces (INF) Treaty on August 2, removing a key barrier to the development of land-based nuclear missiles capable of reaching their targets in just minutes’ time.

US Army Secretary Ryan D. McCarthy indicated late last month the service’s new-found interest in hypersonic weapons following the treaty’s lapse, noting the US would definitely field such a weapon with a range of between 500 and 5,500 kilometers in the next few years.

Also on Monday, Aerojet Rocketdyne announced it would be working with Northrop Grumman as an “integral part” of the lucrative GBSD program, a $63 billion contract that will replace the Pentagon’s aging Minuteman III ICBM stocks. The missiles form the land-based portion of Washington’s Nuclear Triad, ensuring its ability to respond in kind to any kind of nuclear attack, no matter how comprehensive in scope.

“Aerojet Rocketdyne is proud to be part of Northrop Grumman’s nationwide GBSD team and excited for the opportunity to provide a large solid rocket motor system and a post-boost propulsion system for this vital defense program,” Aerojet Rocketdyne CEO and President Eileen Drake said in the statement.

“Over the past three years Aerojet Rocketdyne has refined processes and built state-of-the-art facilities to mature our technology and increase affordability for the propulsion systems we will provide for the GBSD program.”

The statement further noted that “Aerojet Rocketdyne propulsion has powered every US Intercontinental Ballistic Missile (ICBM) ever flown or fielded.” While the firm was only formed in 2013, it grew out of Aerojet, a rocket engine maker that’s now a subsidiary of GenCorp and which purchased Pratt & Whitney’s rocket engine-making spinoff, Pratt & Whitney Rocketdyne.

The result is that, apart from Orbital ATK, Aerojet Rocketdyne dominates the field of rocket engine manufacturing. Since Orbital ATK was bought by Northrop Grumman last year, Boeing was forced to drop out of the running for the GBSD contract, as Orbital was its engine supplier, SpaceNews reported.