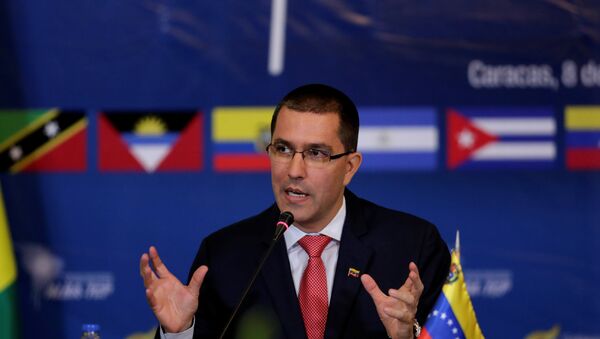 © REUTERS / Ueslei Marcelino
Subscribe
Earlier this week, the US and a number of other American allies invoked a 1947 defence agreement, defining an ongoing large-scale Venezuelan military exercise near the Colombian border as a “bellicose” move. Both Venezuela and Colombia have accused each other of attempting to spark a military conflict.

Venezuela’s Foreign Minister Jorge Arreaza said Friday his country is ready to defend itself if invaded, according to an AFP report.

"We are ready to protect ourselves, we are ready to react," Arreaza said at a news conference in the wake of meeting with United Nations High Commissioner for Human Rights Michelle Bachelet in Geneva. "We will let no one trample sacred Venezuelan soil, we will respond and hope that never happens.”

Arreaza’s comment comes in response to the invocation of a 1947 Inter-American Treaty of Reciprocal Assistance, known as TIAR or the ‘Rio Treaty,’ earlier this week, by the US and ten other nations. According to the treaty, of which Venezuela is a party, every country must treat an attack on any member as an attack on itself.

"Recent bellicose moves by the Venezuelan military to deploy along the border with Colombia as well as the presence of illegal armed groups and terrorist organizations in Venezuelan territory demonstrate that [Venezuelan President] Nicolas Maduro not only poses a threat to the Venezuelan people, his actions threaten the peace and security of Venezuela’s neighbors," US Secretary of State Mike Pompeo said in a statement retweeted by US President Donald Trump on Thursday.

The U.S. joins 11 partner nations in invoking the Rio Treaty to confront the political, economic, & humanitarian crisis unleashed by Maduro on #Venezuela & the region. Together we will consider multilateral economic & political options to end the havoc. https://t.co/COIIcIEWav

​On Tuesday, Venezuela's armed forces said they had begun mobilizing 150,000 troops for military exercises on the Colombian border, after accusing Colombia of attempting to spark a military conflict, the Buenos Aires Times report says.

On Friday, Arreaza said that the military exercise is Venezuela’s “constitutional obligation to protect its territory,” adding that “it is not a provocation” to a military conflict.

In the meantime, Colombia has accused Venezuela of sheltering Revolutionary Armed Forces of Colombia (FARC) dissidents and of using “the rejection by dissident FARC leaders of a peace accord to provoke a military conflict,” cited by the Times.

The TIAR was signed by 23 countries on 2 September 1947, in Rio de Janeiro. Since that time, five countries, including Cuba and Mexico, have denounced the treaty.

In January, Venezualen opposition politician Juan Guaido proclaimed himself interim president of Venezuela and launched a campaign to oust Maduro from office. Guaido enjoys the support of the US and many of its allies, while Russia, China, Turkey and several other nations view Maduro as the legitimate president. Despite Guaido’s best efforts, all attempts to stage a coup have failed and the Armed Forces has refused to defect to his cause.

000000
Popular comments
Isn't there a conflict of interest, concerning the US Ambassador to Venezuela, Elliot Abram? He sits on the Board of Directors, of the National Endowment for Democracy, tax payer funded NGO, which funded, trained and supported Guiado, who without a single vote cast, believes himself to be the President of Venezuela. Funny that. Together with those same nations, supporting the US against Venezuela, be so happy to find themselves fighting Russia and China, should they decide to do something stupid?
anne00marie
14 September 2019, 00:38 GMT6
000000
The US is pulling every legal hatchet out of the hat revealing it don't know how to bring down Venezuela . Maduro is on top of the measure , meaning the Bolivian Revolutionaries are more than a match for the American Mercenaries . China and Russia sit tight , quietly confident with Bolton getting the flick , an added bonus .