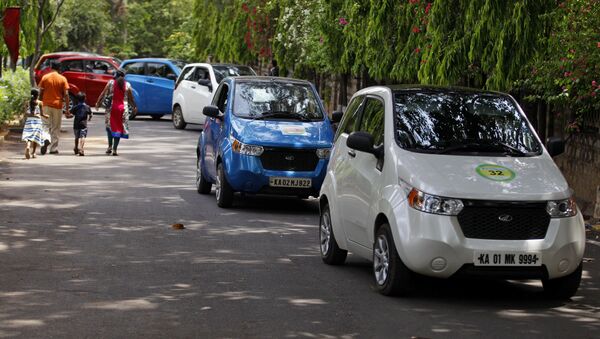 New Delhi (Sputnik): Amid worries over air quality plunging to abysmally low levels during the festive season, the Government of Delhi on Friday announced plans to restart the odd-even rule to limit the number of cars on the roads.

Under the odd-even scheme, cars with licence plates ending in odd numbers and even numbers are allowed on the roads on alternate days, except weekends. When it was first enforced in 2016, exemptions were granted to women drivers, cars ferrying VIPs and two-wheeled vehicles.

With pollution levels expected to hit high levels during and after the Indian Festival of Lights, Diwali, Delhi's Chief Minister Arvind Kejriwal said the city administration plans to implement the odd-even car rule between 4 and 15 November.

He, however, said if the Central Pollution Control Board (CPCB), the body that determines national pollution levels, says air quality is at standards set by the Graded Response Action Plan, the car rationing scheme won't be activated.

The chief minister did not spell out the scheme's details. But he told media it would be part of a seven-point action plan to combat air pollution annually caused by crop burning in the Indian states of Punjab and Haryana.

"We will take into consideration all findings from the previous odd-even experience," he said during a media briefing.

The chief minister also announced other measures to counter pollution, including procuring and offering anti-pollution masks for the public, mechanised road cleaning, tree planting drives and plans to curb pollution in 12 hot spots in the city.

A campaign to stop using firecrackers to celebrate Diwali would also be enacted, he said, adding his government would organise a laser-show a day before the festival.

Before the announcement, the chief minister said he had consulted experts, and they had given the go-ahead for the car rationing program.

Delhi has undertaken several such steps in the past to fight pollution. The most publicised is the city government's introduction of the 'odd-even' rule for restricting the numbers of cars on Delhi roads, first introduced in January 2016. The practise was discontinued in November 2017.

The World Health Organisation (WHO) has ranked Delhi one of the world's most polluted cities for years.

While the effectiveness of the odd-even car scheme is questionable, the city government quoted Dr Ken Lee, Executive Director of the Energy Policy Institute at the University of Chicago, as saying on Thursday that the 2016 scheme had "reduced particulate air pollution concentrations by 14 to 16%".