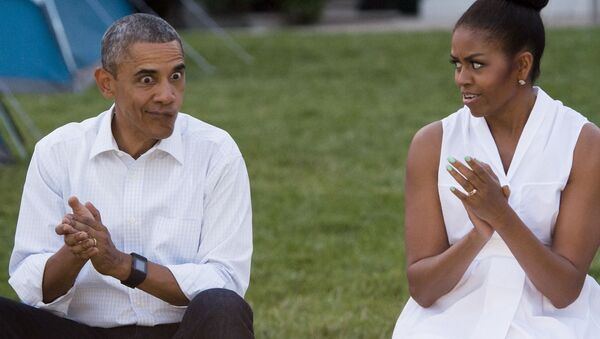 “This is really deplorable behaviour. I hope that the Obamas realize that these actions are not consistent with the values they preach and that they instruct their attorneys to immediately dismiss the petition," Zerner told Fox News in a statement.

Zerner told Fox News that the “Obamas have known for almost a year” that their Higher Ground Productions trademark application was rejected by the US Patent & Trademark Office because it was too similar to his client’s Higher Ground Enterprises.

“Instead of simply picking another name, the Obamas' lawyers have now filed a meritless petition to cancel my client's trademark so they can take it for themselves,” Zerner said, adding that his client’s motive is “not political,” but rather the company merely wants to keep its name in order to avoid confusion.

The Obamas launched Higher Ground in an effort to produce a diverse mix of content, which includes a scripted series, an unscripted series, a docuseries, as well as documentaries and features, according to a previous press release from Netflix. Their company had announced a total of seven projects earlier this year – both films and series – that the former president said would entertain but also "educate, connect and inspire us all."

The Obamas told the US Patent & Trademark Office that their production company wouldn’t be mistaken for an e-book publisher despite the similar name, however, the petition to cancel came shortly after.

“In a petition to cancel, the Obamas essentially allege that [Higher Ground Enterprises boss Hanisya] Massey doesn't deserve a trademark because ‘Higher Ground Enterprises’ wasn't actually in use at the time of its 2016 registration,” The Hollywood Reporter’s Eriq Gardner, who first reported the quarrel, wrote. “Her trademark is in Class 41, which includes entertainment services,” he added.