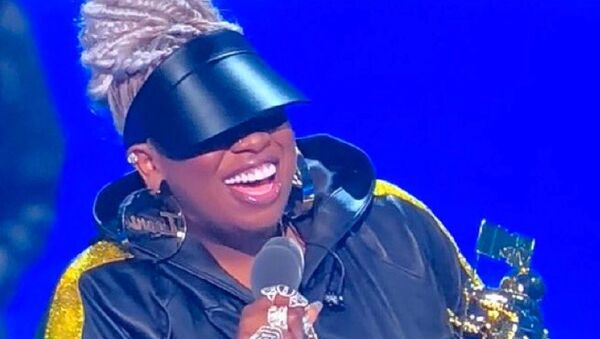 American hip-hop star Missy Elliott - who had not performed at the show in 16 years - won the 2019 Video Vanguard Award. Elliott dedicated her award to the global dance community, adding that “because when y’all get on the stage with these artists, y’all are not just props”.

“I love y’all. I promised I wouldn’t cry this time because I cry at every awards show [...] This Michael Jackson Video Vanguard Award means so much to me. I’ve worked diligently for over two decades and I never thought that I would be standing up here receiving this award [...] Y’all are the icing on the cake. Y’all are the beat to the heart. I dedicate this to every dance community out there”, Elliott said emotionally before bringing a few of her younger dancers up to the microphone to celebrate them as “the next generation”.

In response to Elliott’s performance and speech, her fans instantly took to social media, creating a Twitter storm to her greatness.

Wait, so after Missy completely left the stage awash in her legacy and blessed the generations of the future... we are just gonna keep going with an award show?

Elliot, 48, earlier tweeted an emotional thank you after the news broke that she would become the first female rapper to receive the Michael Jackson Video Vanguard award, telling fans that she is "crying happy tears".

I am Humbly Grateful to be receiving the MichaelJacksonVideoVanguard Award😭🙏🏾❤️ I Thank my FANS “Supafriends” who fought diligently to see this day come🙏🏾@KidFury @crissles who rooted for years 4 me🙏🏾 I am crying happy tears😭Thank you God @MTV @vmas am SO HUMBLED🙏🏾 pic.twitter.com/udfhBNc78k