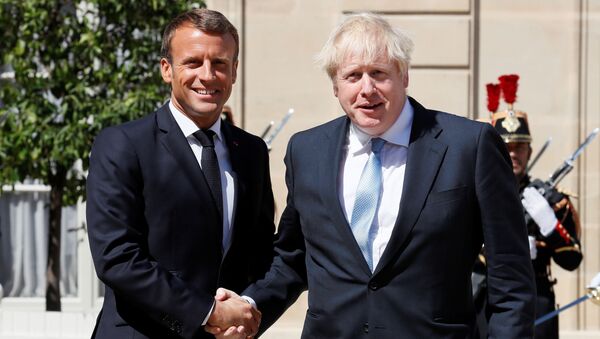 MOSCOW (Sputnik) - UK Prime Minister Boris Johnson has said on the sidelines of the G7 summit in Biarritz that chances for a better Brexit deal with the European Union are improving, as his key messages have "landed" with the bloc's leaders after his recent meetings with German Chancellor Angela Merkel and French President Emmanuel Macron.

"And I think in the last few days we have had quite a lot of success in landing some messages about what the United Kingdom can do and cannot do. Let's be clear, I think at the moment there is a reasonable chance that we will get a deal," Johnson told the Sky News broadcaster.

The prime minister stressed that the current withdrawal agreement was "dead," as it was repeatedly rejected by the UK parliament.

"I think the chances of a deal are improving but there's got to be a great deal of realism on the part of our friends that the withdrawal agreement is dead. The text that parliament rejected three times cannot now be made to go through," Johnson noted.

According to the prime minister, the EU leaders understood that in the case that London and Brussels do not strike a deal by October 31, the United Kingdom will not be obliged to pay 39 billion pounds (about $50 billion) in compensation for Brexit.

Johnson reportedly intended to inform EU leaders during the ongoing G7 summit that in the event of a no-deal Brexit, the amount of compensation that London should pay to Brussels would be reduced to 9 billion pounds

Last week, Johnson held talks with Macron and Merkel on the issue of Brexit. The meetings came shortly after the UK prime minister had released a four-page letter to outgoing President of the European Council Donald Tusk with new proposals regarding Brexit, particularly the future of the border between Northern Ireland and Ireland.

Johnson made it clear that he wanted the United Kingdom to leave the European Union on October 31 "come what may," although he said he preferred an orderly exit. He has been calling on the European Commission to drop the clause that seeks to avoid a hard Irish border by tying the country to the EU customs union, despite Brussels saying it will not reopen negotiations.