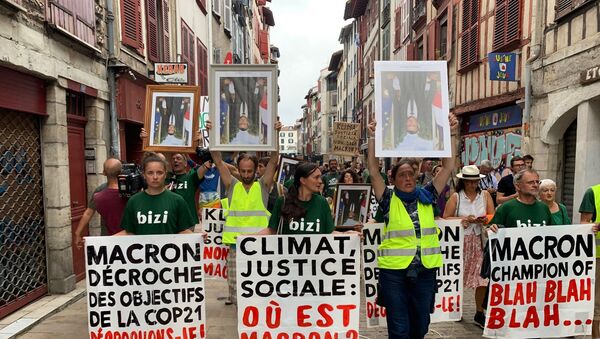 The G7 summit, chaired by French President Emmanuel Macron, officially started on 24 August and will last until 26 August. The summit is set to highlight the issue of inequality and the advancement of universal access to social welfare.

Huge waves of protests are being seen Sunday in Bayonne and other towns around Biarritz, where people are blocking public squares to protests against the G7 summit.

The day before, a similar protest was held in Bayonne, with its organisers calling on the protesters to “invade” the host-city.

Today’s action, in contrast, has been relatively calm, with protesters clapping their hands and not showing any aggressive behavior.

People are marching with Macron’s portraits stolen from the city halls across the country. For months, activists, in violation of laws, had been taking the portraits out of municipal buildings. In total, they have managed to collect 128 official images of the president.

Along with the portraits, the demonstrators are carrying banners that say: "Macron – blah-blah-blah president," "Climate, Justice – Where is Macron?" and "Heads of State, Act Now: the Amazon is Burning."

After a short "walk" across the city, several hundred activists gathered in a column to start a march. Nearly every third participant carries a wrapped portrait of Macron over their head. Many of the portraits that wrapped in a paper read various slogans addressing the French authorities.

The three-day G7 summit started in Biarritz on Saturday. Among main topics are the fight against inequality, the advancement of universal access to social welfare and climate, an issue that has come to the forefront amid rainforest fires raging in Brazil.