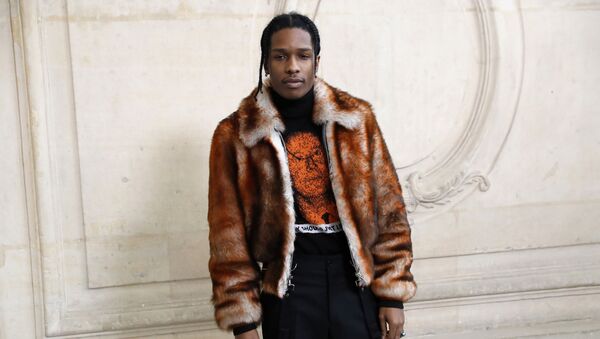 © AFP 2021 / PATRICK KOVARIK
Subscribe
A$AP Rocky (real name: Rakim Mayers) was released from jail in early August, two weeks prior to the verdict in his assault trial in Sweden. US President Donald Trump had lobbied for the rapper to be freed, but his associates say that Rocky snubbed their request for a simple ‘thank you’.

Two of Donald Trump’s allies, who claim they were involved in behind-the-scenes efforts to wrench A$AP Rocky from the hands of the Swedish judiciary, are upset with the apparent lack of gratitude from the famed artist.

Darrell Scott, an Ohio pastor and board member of the National Diversity Coalition for Trump, and Kareem Lanier, the co-chairman of the Urban Revitalisation Coalition which aims to connect Donald Trump with the predominantly pro-Democratic black community, have entered the picture as key figures in the Rocky-rescuing campaign.

In an interview with Yahoo News published on Thursday, they said they were put in touch by a man identified as Hassan Muhammad, a self-styled “fixer” for A-listers.

Muhammad told Scott and Lanier about the ordeal of Rocky, who was detained on 3 July in Sweden after a street fight in Stockholm. The rapper and his entourage were accused of assaulting two men after a gig in late June, but he claimed he acted in self-defence and released a video showing that the men were following them on the street and refusing his requests to leave them alone.

Scott and Lanier decided to get Donald Trump involved because they believed the artist to be innocent. They reached out to Rocky’s manager, John Ehmann, and convinced him that a presidential intervention was necessary.

“The White House didn’t ask for anything,” Scott recalled telling Ehmann. “There were no conditions attached, but my condition and Kareem’s condition was that all I’m asking for you guys to do is say thank you.”

They then reportedly contacted Jared Kushner, Trump’s senior White House adviser and son-in-law, who informed the president on the issue.

Kim Kardashian, the wife of pro-Trump rapper Kanye West, is also said to have visited the White House to advocate for Rocky’s release.

Scott and Lanier claim they discussed the case with Trump during his trip to Cleveland on 12 July. A week later, he told reporters at the White House: “Many, many members of the African-American community have called me, friends of mine, and said, ‘Could you help?’. I personally don’t know ASAP Rocky, but I can tell you he has a lot of support from the African-American community in this country.”

Trump then personally vouched for Rocky's bail after a phone call with Sweden’s prime minister, assuring his counterpart that the rapper was not a flight risk, and sent a top hostage envoy to observe the trial.

Just had a very good call with @SwedishPM Stefan Löfven who assured me that American citizen A$AP Rocky will be treated fairly. Likewise, I assured him that A$AP was not a flight risk and offered to personally vouch for his bail, or an alternative....

Lanier said that relations between him and Rocky’s team took a turn for the worse after Trump got involved.

At one point, he “snapped” at one of Rocky’s attorneys who appeared to be “nonchalant” about Trump’s intervention. “I was like, man, you ungrateful motherf----ers, you. I can’t believe you. ... We didn’t ask you guys for nothing other than for you guys to be grateful,” Lanier recalled saying. “We just want you guys to be appreciative and say thank you.”

Rocky was released from custody on 2 August, after spending almost a month behind the bars, and thanked fans and supporters on Instagram. No member of the Trump administration earned a specific mention.

Shortly after his release, the two Trump associates said they began contacting Rocky’s team to find out if Rocky would do something specifically thanking the White House, but had no communication. “We don’t get a call. We don’t get a call at all,” Scott was quoted as saying.

After they kept up the pressure, Ehmann promised to arrange a Kushner-Rocky call but stopped “returning our messages”, Lanier was quoted as saying.

He suggested that Rocky refused to acknowledge Trump’s contribution fearing a potential pushback from the African-American community.

“One of the problems that we have as a culture — and I’m talking about black Americans — is herd mentality,” he said. “Right now it’s popular for those guys to bash President Trump.”

“All he had to do was do a two-minute call to say thank you,” said Scott. “Rocky hasn’t even called us and said, ‘Hey, man, thank you guys. I appreciate it,’ in private. Just in private.”

A Swedish court found Rocky and his bodyguards guilty of assault on 14 August, but did not give him further jail time. The rapper issued another statement saying he was “disappointed” with the verdict, but thanked his team, management, attorneys, the music label and “everyone who advocated for justice.”

I AM OF COURSE DISAPPOINTED BY TODAY’S VERDICT. I WANT TO SAY THANKS AGAIN TO ALL OF MY FANS, FRIENDS, AND EVERYONE WHO SHOWED ME LOVE DURING THIS DIFFICULT TIME. IMMA KEEP MOVING FORWARD. THANK YOU TO MY TEAM, MY MANAGEMENT, ATTORNEYS, LABEL AND EVERYONE WHO ADVOCATED FOR JUSTICE. 🙏🏿