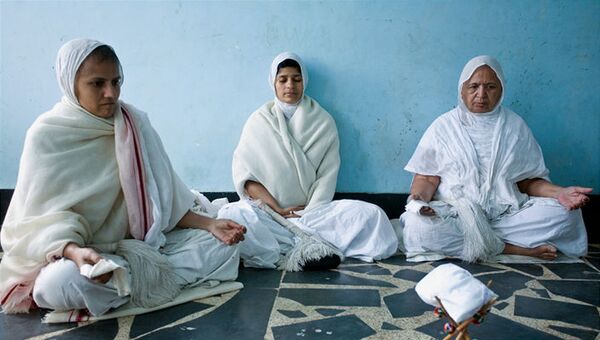 New Delhi (Sputnik): An online debate was triggered after an Indian parliamentarian raised the issue of an attack on a Jain community temple for using the Hindi language on a banner in the southern state of Karnataka.

Netizens seemed divided on the debate over the age-old resistance to the usage of Hindi in southern Indian states.

It all started on Sunday, after Tejasvi Surya, who represents the Bengaluru South constituency of Karnataka for the ruling Bharatiya Janata Party in Indian Parliament, expressed grave concern on Twitter over a recent attack on the Jain community for using temple banners with Hindi language text.

The politician also sought to point out that the same protestors don’t object to the use of the Arabic language in the region.

​Infuriated at the Jain community for not using Karnataka’s local Kannada language on temple posters, a group of men tore apart and pulled down temple banners; this was captured on a video which has since gone viral.

​Meanwhile, as the news of the incident spread, a large segment of netizens hailed Surya for highlighting the issue, urging the people of Karnataka to respect the Hindi language.

​However, there were others who didn’t approve of Hindi being promoted in the State. Many of these people reiterated their demand to respect the regional languages of southern Indian states.

​Meanwhile, the politician later asked that members of the Jain community use the local Kannada language in addition to Hindi.

​The debate over Surya’s Tweet comes following recent protests in the south Indian states over the Indian government’s new draft of the National Education Policy, which initially proposed introducing three languages including Hindi into the national curriculum.
The draft had sparked considerable outrage in the southern states of Karnataka, Tamil Nadu, Kerala, Andhra Pradesh and Telangana. Many regional citizens see it as part of a move to impose Hindi over their local languages.

Hindi is the most commonly spoken language in the northern and central parts of India. The language has gradually also spread in the southern Indian states, primarily due to the wide-scale economic migration of the Hindi-speaking population into these states.
For decades, a large segment of the population and political parties of southern Indian states resented the use of Hindi language in the region, saying that it would pose a challenge to their regional linguistic identity.