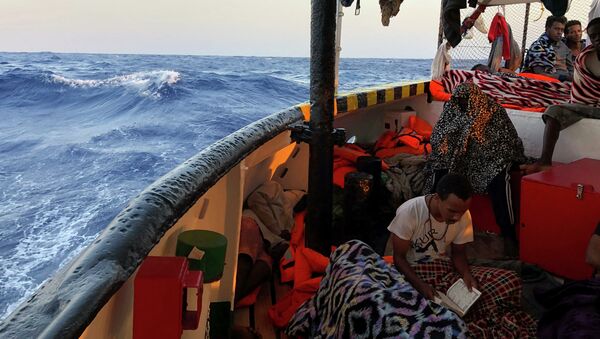 The Spanish government earlier reportedly offered the charity boat Open Arms, which has 100 rescued migrants on board and has been blocked by Italy from docking at the port of Lampedusa for over two weeks, to dock at the closest Spanish port.

On 18 August, Spain reportedly offered the boat to dock at the port of Algeciras, but the non-governmental organisation Proactiva Open Arms, to whom the boat belongs, said that the humanitarian situation on the ship was dire and that the passengers and crew could not make the five-day journey to the Spanish port.

​According to the Spanish government statement, the charity did not respond to its offer to dock at the closest Spanish port.

Before that, the Open Arms organisation sent an urgent request to the authorities in Lampedusa, requesting that they let the boat dock, saying that the rescued migrants on board were in critical condition psychologically.

A total of 107 rescued migrants, mostly from Africa have been anchored off the coast of Italy for 18 days onboard the Open Arms boat, unable to disembark due to Italian Interior Minister Matteo Salvini banning them from doing so.