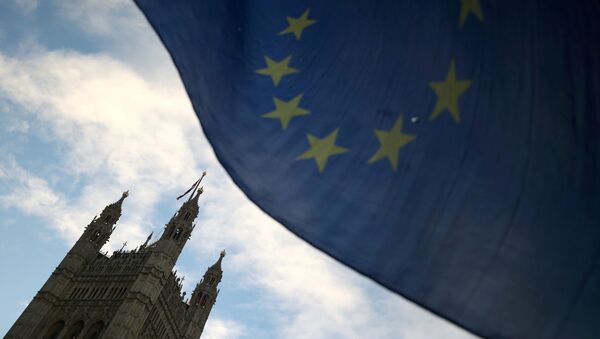 MOSCOW (Sputnik) - The UK government expects that the country may face food, fuel and medicine shortages as well as months of border delays and a rise in social care costs in the event of a no-deal Brexit, The Sunday Times reported on Sunday, citing leaked Whitehall papers.

"This is not Project Fear — this is the most realistic assessment of what the public face with no deal. These are likely, basic, reasonable scenarios — not the worst case", a senior source in the government told the newspaper.

Reacting to the publication, Michael Gove, who was appointed by Prime Minister Boris Johnson as a minister in charge of no-deal preparations, however, said otherwise.

"We don’t normally comment on leaks - but a few facts - Yellowhammer is a worst-case scenario - v significant steps have been taken in the last 3 weeks to accelerate Brexit planning", Gove said in a Twitter post.

In addition, the report predicts the return of a hard border in Ireland, fearing that it could lead to protests and road blockages.

Months of expected delays at other borders with the European Union, meanwhile, may leave London and the southeast of England without stable fuel supply. Dwelling on potential chaos on external borders, the government estimates that up to 85 percent of lorries crossing the Channel may face delays of up to two and a half days at the French customs.

Such disruption at ports may be in place for up to three months before the traffic flow returns to 50-70 percent of the current level, according to the papers.

Among other ramifications are extended delays to supplies of fresh food and medicine, some 75 percent of which comes via the Channel.

Finally, the no-deal will shoot up costs in the social care sector, affecting both smaller and larger providers.

According to the newspaper, the report was written by the cabinet earlier in August under the codename Operation Yellowhammer. The document reportedly outlines the most likely ramifications of the country crashing out of the bloc without an agreement rather than some hypothetical worst-case scenario.

The UK government announced that it had started stockpiling food, fuel and other stuff to prepare for a no-deal scenario back in January. The United Kingdom voted to leave the European Union in 2016. Since then, the withdrawal has been delayed several times due to parliament's repeated refusal to accept the deal proposed by former Prime Minister Theresa May. Brussels has given London several deadline extensions to come up with a new plan, with the latest one set for 31 October.

Johnson has repeatedly stated his determination to withdraw the United Kingdom from the bloc by 31 October, with or without a deal. In his first speech as prime minister, he said that while London would work to secure a new and "better" deal with the European Union, preparations for a potential no-deal Brexit would be necessary if Brussels refused to negotiate any further.