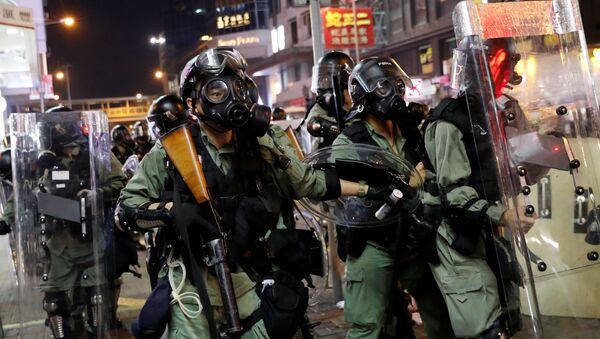 The five suspects, one female and four males aged between 20 and 22, were detained on August 14 and 15 after removing the Chinese national flag from a flagpole and throwing it into the sea on August 3-5, Xinhua News Agency cited the Hong Kong Police as saying.

The suspects' computers, phones and clothes have been seized by the police for further investigation.

According to the law, violators can face up to three years in jail for desecrating the national flag and coat of arms. 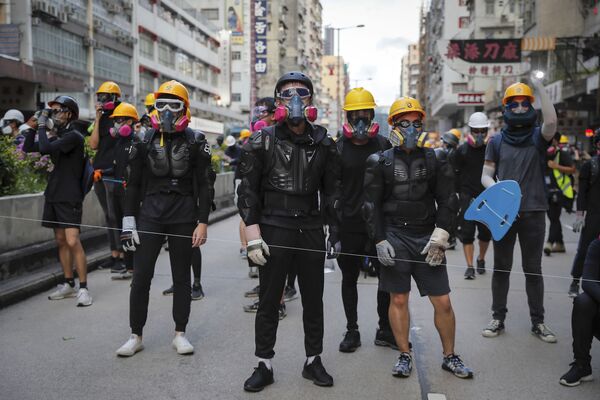 Protesters with protection gears face with riot policemen on a street during the anti-extradition bill protest in Hong Kong, Sunday, Aug. 11, 2019. Police fired tear gas late Sunday afternoon to try to disperse a demonstration in Hong Kong as protesters took over streets in two parts of the Asian financial capital, blocking traffic and setting up another night of likely showdowns with riot police.
© AP Photo / Kin Cheung

Mass protests erupted in China's semi-autonomous Hong Kong in early June in response to a controversial bill that would allow extraditions to the mainland. Although the local parliament eventually announced that it had suspended the bill, people continue to protest, demanding that it be withdrawn completely.

Several countries have already expressed concerns and advised their citizens against traveling to Hong Kong amid the escalation of public unrest.

China has repeatedly warned foreign nations against meddling in the affairs of Hong Kong.