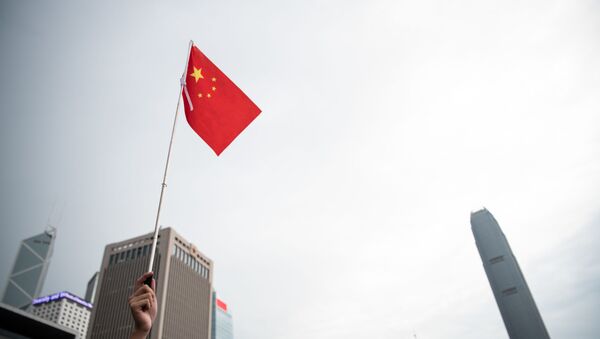 China has repeatedly warned foreign nations against meddling in the affairs of Hong Kong, where a government protest movement which has lasted several months continues amid growing violence and unrest.

Beijing has accused the Trump administration of engaging in "anti-China criminal activities" in the increasingly restive semi-autonomous city of Hong Kong.

"US politicians distort facts and blindly pursue double standards, which is already close to a hysteria. They have colluded with radical criminal elements and are insanely involved in anti-China criminal activities in Hong Kong," the Office of the Commissioner of the Chinese Foreign Ministry in Hong Kong said in a statement on Thursday.

In a bipartisan motion on Wednesday, the US House Foreign Affairs Committee issued a warning to Beijing, that if China attempts to forcibly shut down the demonstrations, its actions “would be met with universal condemnation and swift consequences”.

​The US president, who is embroiled in a year-long trade war with Beijing, earlier claimed he had intelligence indicating that China was deploying its troops to the border with Hong Kong, prompting Beijing to warn the US against meddling in its internal affairs.

The comments come after more than 10 weeks of sometimes-violent mass protests sparked by opposition to a bill that would allow for the extradition of criminal suspects in Hong Kong to mainland China.

Protesters voiced concern that the bill would increase Beijing's control over Hong Kong, which enjoys partial autonomy from the Beijing government, including in legal, economic and financial affairs.

The Hong Kong government suspended the bill in June, but the protests have evolved into a broader movement demanding political reform.

A number of Western nations, particularly the United States, have openly endorsed the protests, while the Carrie Lam government has condemned them for turning Hong Kong into a "dangerous city". Beijing has accused the protesters, who have clashed with police and blocked the local airport and roads, of committing "evil and criminal acts".