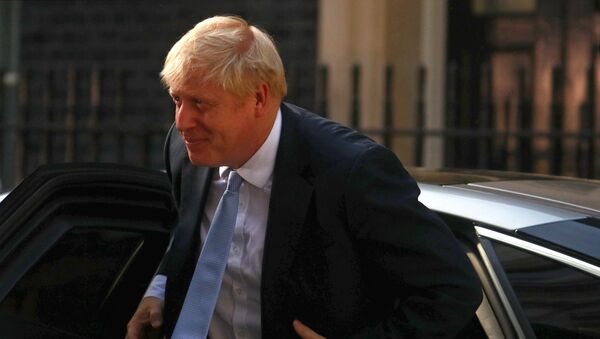 Demond Cureton
All materialsWrite to the author
The newly-appointed Prime Minister said that Brussels was "not compromising at all" on striking a deal on Brexit and that the longer the situation continued, the more likely a no-deal Brexit was going to take place.

UK prime minister Boris Johnson took to Facebook on Wednesday to address his followers, where he stated that there was a "terrible kind of collaboration" between "those who think they can block Brexit in parliament and our European friends".

"Our European friends ... are not compromising at all," Mr Johnson said as he voiced concerns over talks with Brussels.

Mr Johnson also reiterated his stance on Brexit, stating that the UK was coming out of the EU on 31 October and that the British people were growing "frustrated" over ongoing delays regarding the country's withdrawal from the European bloc.

The British public have "had a lot of elections" and wanted the country to "get on and deliver Brexit", he said, adding that that the UK's "friends in Europe and in Parliament" would see it was "vital" to leave the EU.

We will invest more money into our NHS, crack down on violent crime and get our economy growing to pay for great public services.

The Facebook livestream is the latest of several announcements that the British PM has made, including his meeting with US National Security Advisor John Bolton on Monday, where the two officials discussed signing a a UK-US trade deal after London completed its exit from the EU, as well as Washington's concerns over Huawei and tensions in the Persian Gulf with Iran. Negotiating with US officials would be a "tough old haggle" but that the UK could get there, and that the "single biggest deal" that London needed to forge was with "our friends and partners over the channel", he told Sky news on Tuesday. The Prime Minister also launched a series of reforms and investments for the National Health Service (NHS), as well as recruiting 20,000 police to UK streets by 2021 to tackle rising crime across the country.