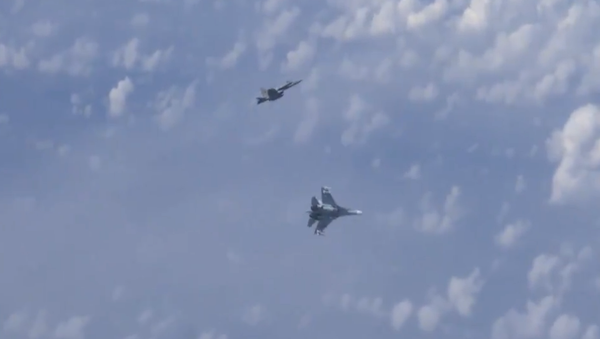 According to the Russian military, the NATO jet approached the defence minister's plane over neutral waters in the Baltic Sea.

Shoigu was reportedly flying en route to Moscow from the Russian exclave of Kaliningrad, which is surrounded from the south, east and northeast by NATO members Poland and Lithuania.

Footage taken from inside the defence minister's plane showed the Spanish Air Force F-18 flying alongside the aircraft, before pulling a hard left banking maneuver as a Su-27 approached from under the airliner. The F-18 is then seen ascending sharply, pulling away from both planes.

Tweet reads: "NATO F-18 tried to approach Sergei Shoigu's plane in the Baltic Sea. Su-27 pilots pushed the fighter away, preventing it from approaching close to the airliner."

Later in the day, NATO confirmed that an alliance warplane had been scrambled to intercept a Russian plane over the Baltic Sea, saying the intercept was carried out "to identify" the aircraft, and that it did not know who was onboard. The alliance's press service said its aircraft returned to base after successfully identifying the plane.

"Jets from NATO's Baltic Air Policing mission scrambled to identify the (Russian) aircraft which flew close to Allied airspace. Once the identification of the aircraft had taken place, the NATO jets returned to base. NATO has no information as to who was on board," the alliance said in a statement.