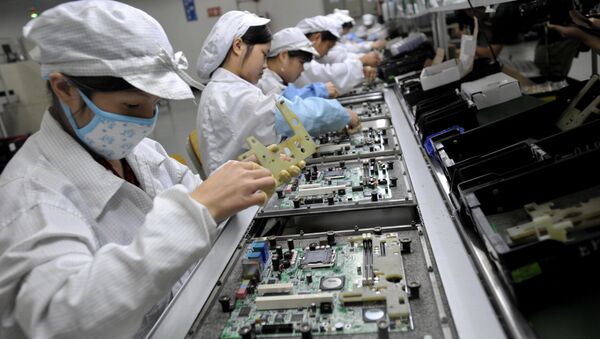 © AFP 2021
Subscribe
Students were intimidated into adapting to inhumane working conditions by teachers who received monetary rewards, a Chinese labor watchdog says in a 70-page report.

According to the report, children aged 16 to 18 comprise about 21 percent of Foxconn’s labor force and are intimidated into working overtime. Per Chinese labor laws, underage workers are forbidden from working overtime or night shifts, a Fox News report notes. The legislation says no more than 10 percent of the entire staff can be made up of children.

The children – called ‘interns’ at Foxconn – were intimidated into overtime work by school teachers in return for monetary rewards, China Labor Watch says in the report. Each teacher received a $425 subsidy for their efforts, while schools themselves were paid $0.42 for every hour an intern worked.

“In the beginning, I wasn’t very used to working at the factory, and now, after working for a month, I have reluctantly adapted to the work,” one intern told the watchdog. According to her story, her teacher threatened that she would not graduate if she left Foxconn. “Working 10 hours a day, every day, is very tiring,” she said.

Reacting to the report, Foxconn issued a statement saying that the company has “doubled the oversight and monitoring of the internship program with each relevant partner school to ensure that, under no circumstances, will interns [be] allowed to work overtime or nights.”

“There have been instances in the past where lax oversight on the part of the local management team has allowed this to happen and, while the impacted interns were paid the additional wages associated with these shifts, this is not acceptable and we have taken immediate steps to ensure it will not be repeated,” the company told The Guardian, adding that they will increase the number of regular workers and review salaries “right away.”

Amazon reacted to the allegations described in the report, saying it does not “tolerate violations of our Supplier Code of Conduct.”

“We regularly assess suppliers, using independent auditors as appropriate, to monitor continued compliance and improvement--if we find violations, we take appropriate steps, including requesting immediate corrective action. We are urgently investigating these allegations and addressing this with Foxconn at the most senior level. Additional teams of specialists are on-site to investigate, and we’ve initiated weekly audits of this issue,” the company said in a statement.