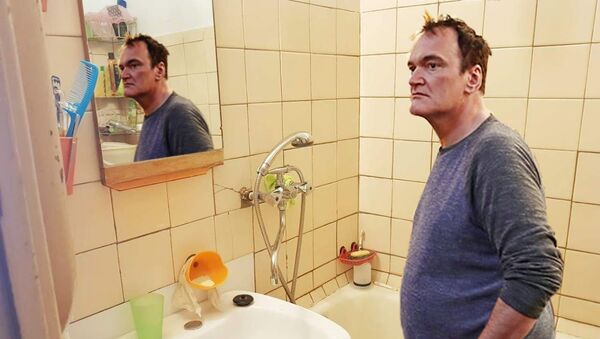 Lilia Dergacheva
All materialsWrite to the author
The sale offer indeed features Quentin Tarantino, or rather his image, harmoniously mingling with the surroundings, with the inquisitive, and at times appreciative, expression on his face definitely ringing a bell with meme lovers.

Quentin Tarantino is not solely a legendary film director, but also happens to be a perfect “real estate” pro and  “an apartment buyer” - at least in Russia, after an inventive resident in Chelyabinsk, the Urals, photoshopped an image of a reflective Tarantino into snapshots of his apartment that he had put up for sale.

The pictures sport him “going around” the 69-square-metre three-bedroom apartment, focusing on deep cognitive processes as he glances upon the Soviet-style kitchen, the old vintage drawer and curtains with giraffes. At some point, the photoshopped director gives the residence on sale a thumbs-up, whereas as he enters the bathroom, he is shown standing with his arms akimbo.

The humour behind the photo selection, published, incidentally, on the well-known Russian second-hand shopping website Avito, was immediately appreciated by the potential online customers, with one asking:

“The flat is on sale together with the man, right?”

The author of the listed offer found the right words to respond with:

“Nope, he just came to see the place”, he replied.

The flat owner apparently engaged in a Photoshop battle that gained momentum after Quentin Tarantino visited Moscow for the first time since 2004 to present his new movie – “Once Upon a Time in Hollywood”. After the premiere, the Hollywood legend was shown around the Russian capital by high-ranking officials, such as Culture Minister Vladimir Medinsky, and top cinema A-listers.

Pictures from Tarantino’s excursion around Kremlin gems like Tsar Cannon, Tsar Bell, and the Diamond Fund exposition set out on a big trip on social media, going especially viral after users were stunned with the facial expressions (and at times poses) with which Tarantino looked at the Russian historic artefacts. His penetrating glance has since become recurrent in an array of hilarious memes like these, and a hashtag citing Tarantino’s new film sounds perfectly apt to many – “Once upon a time…”

Hilarious comments also accompanied the unedited pictures, with one stating that Tarantino looks like a Russian provincial resident arriving in the megalopolis for the first time:

“In this pic, Tarantino looks like uncle Yura from Salekhard, who was brought to Moscow, on an excursion to the Kremlin”, the user wrote.

Another stated that there is a well-felt Tarantino “MOOD” in all the pics, while a different user photoshopped an image of the helmeted Russian special force unit OMON taken during the recent Moscow political rallies this month, on top of a Tarantino snapshot: