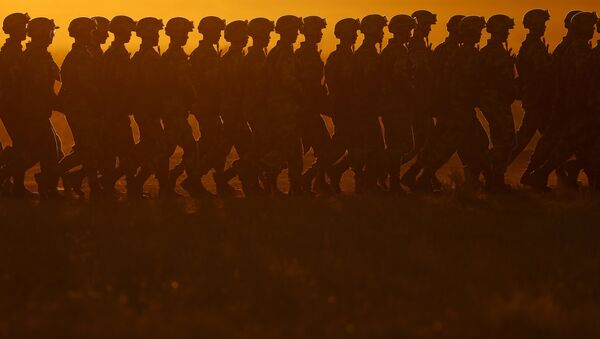 This was the scene during the military parade held on July 4 in Kigali, capital of Rwanda, to commemorate the 25th anniversary of the end of the genocide in Rwanda. During the parade, instead of the Western marches of previous celebrations, the troops adopted Chinese marches and commands that had been taught to them by Chinese instructors.

At the invitation from the Rwanda Defense Force, a crew of six instructors from the Honor Guard of the Chinese People's Liberation Army (PLA) helped train Rwanda soldiers and police for the military parade.

The orderly formation during the parade showed the spirit and energetic looks of the soldiers and police officers, which impressed the Rwanda military. They thanked the Chinese instructors after the parade and said that they would keep using the Chinese-style formation, China Central Television reported.

Senior Colonel Han Jie, leading officer of the PLA Honor Guard, told the Global Times that the training group overcame unfavourable conditions such as language barriers and an arduous environment to fulfil their mission and bring honour to the PLA.

Since 1949, China has held a dozen military parades, which are among the largest in the world. The members of the PLA Honor Guard, which has participated in multiple national parades, undergo very rigorous training and have impressed the world with their ordered and stunning performances.

This is not the first time that a foreign parade has featured Chinese-style drills instead of Western military formations. In December 2017, the Qatar military used the PLA's goose-stepping moves in the Qatari National Day military parade in Doha, capital of the State of Qatar.

Lieutenant Yang Chengqun, 27, the team leader for the training mission in Rwanda, told the Global Times that considering the number of Rwandan soldiers, the Chinese instructors first trained some squad leaders and then extended training to smaller units.

Liu Baoxin, 22, was one of the six instructors. He was responsible for training the squad leaders. He was impressed by the efforts and persistence of the Rwandan soldiers.

"They were so committed to the training and took detailed notes. They would also earnestly imitate the moves we demonstrated," said Liu.

"We were training during the rainy season, so it rained almost every afternoon. We trained together in the rain and our uniforms were wet from a mix of the raindrops and sweat," Liu said.

Liu also noted that the Rwandan soldiers were always on time for training sessions, which were at least 8 hours every day. Chinese instructors gave them immediate feedback to help them improve.

Shi Deyu, 23, was responsible for training the colour guard within one month.

"The average height of the group was 1.95 meters and they were very young. These soldiers needed to carry the national flag and the military flag," Shi said

Shi was under pressure and needed the soldiers to understand the importance of the formation.

"Our training lasted from 8:00 am to 11:30 am without a break. I simplified the training and let them rest once they did better," Shi said.

Shi said that the Rwandan squads consisted of soldiers of various ranks with a year to five years of military experience.

"Each team member had a different level of understanding and physical fitness," he said, noting that this was also one of the major challenges they faced when starting the training.

However, the Rwanda soldiers "were so willing to learn and eager to excel that even when they were tired, they did not ask for a break.

"I had to check every few hours to see if they were okay," Shi said, noting that a female soldier fainted during the training. After a 10-minute break, she returned to continue training.

Rong Zhichang, a 23-year-old instructor, said that in order to inspire the soldiers during the later period of training, the Chinese instructors encouraged them to sing local songs and play some games.

All the efforts made by the Chinese instructors and Rwanda soldiers paid off as they kept in perfect formation during the parade.

"The President of Rwanda Paul Kagame was very happy with the military parade and their military leaders thanked us," Zhang Jinqing, one of the six PLA instructors, told the Global Times.

In recent years, China and African countries have strengthened military cooperation. About 2,000 African students come to China's military academies every year, such as the Dalian Naval Academy, according to a release sent to the Global Times during the first China-Africa Peace and Security Forum convened in Beijing in July.

The mission to train Rwanda soldiers also increased the bilateral communications between the Chinese PLA instructors and the Rwandan military.

Zhang said that the Chinese instructors prepared gifts for the Rwandan soldiers, including cool and refreshing oils, which are popular among soldiers.

"By talking to them, we learned that many of the soldiers visited China and are familiar with Chinese culture," Zhang said.

Rong noted that some of the Rwanda soldiers know Bruce Lee and Jackie Chan.

"We built trust and understanding with the Rwanda soldiers. By the end of the training, the soldiers asked me to keep in touch, and they send me simple messages via WeChat now and then," Shi noted.

Rwandan military officials paid great attention to the Chinese instructor's daily life and often asked them whether they were used to their accommodations.

Lieutenant Yang told the Global Times that he felt proud when the formations shouted the Chinese commands during the review. He said he believes that this mission helped deepen China-Rwanda ties.

Yang is not the only one who feels a sense of pride.

"In mid-June, the parade was relocated to the Amahoro National Stadium, where a video clip of Chinese PLA military parades was played on the stadium's huge screen," Rong said, talking about what he felt was one of the most impressive events during the entire training assignment.

"The video showed the Chinese military parade held in Beijing in 2009 and another one in 2015 marking the 70th anniversary of the victory of the Chinese people's War of Resistance against Japanese Aggression," Rong recalled. "The entire audience at the site applauded."

Training abroad has also given PLA instructors more chances to learn about the real Africa.

"Rwanda is known as the Singapore of Africa. It was safe and clean. We did not see trash in the street and people don't use plastic bags. Brown paper bags are used instead. Every Saturday, all citizens take time off to clean up, according to the law," Liu noted.