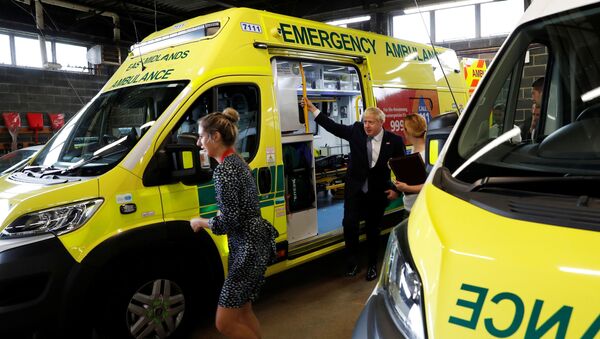 Demond Cureton
All materialsWrite to the author
Plans for the lab, the third for the NHS announced by the Prime Minister over the last few days, will also help doctors to diagnose and detect diseases such as cancer, Alzheimer's and others.

The British PM said that his announcement was “not just about the future of care” and would also "boost the frontline by automating admin tasks and freeing up staff to care for patients.”

His task was also to "ensure the NHS has the funding” it needed to “make a real difference to the lives of staff and patients”, Mr Johnson said.

We have announced an extra £1.8 billion for the NHS. pic.twitter.com/e1E5kq9x4E

“Transforming care through artificial intelligence is a perfect illustration of that," he added.

UK health secretary Matt Hancock added that the UK was “on the cusp of a huge health tech revolution” that could “transform [the] patient experience by making the NHS a truly predictive, preventive and personalised health and care service”.

Mr Hancock added: "I am determined to bring the benefits of technology to patients and staff, so the impact of our NHS Long Term Plan and this immediate, multimillion pound cash injection are felt by all. It’s part of our mission to make the NHS the best it can be.

NHS England CEO Simon Stevens backed the move, stating that using “carefully-targeted” AI was “another step in the right direction” for Britain’s healthcare services, adding that it should help “personalise NHS screening and treatments for cancer, eye disease” and others, as well as “freeing up staff time”.

“Our new NHS AI Lab will ensure the benefits of NHS data and innovation are fully harnessed for patients in this country," Mr Stevens added.

But the Health Service Journal has said that the NHS would not use the investments until 2021.

The news comes after Mr Johnson pledged £1.8bn to building and refurbishing hospitals, with health experts blasting the pledge as a “drop in the ocean” and Labour MPs slamming the move as money being used from existing healthcare budgets.

While the Tory government had promised in the past a £20bn yearly injection into the NHS, which had been made by former UK prime minister Theresa May's government with aims to boost public healthcare by 2023.

Mr Johnson had also pledged an additional £350m a year to health services, arguing that it was being sent instead to pay the European Union, as well as a major shake-up of NHS pension rules earlier this week aimed at stopping senior doctors from refusing shifts in order to avoid tax contribution penalties.