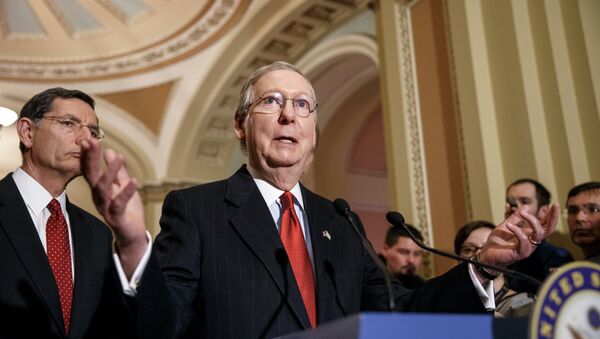 The Kentucky senator earned the wrath of Democratic leaders and anti-gun activists over his decision to block two bills proposing enhanced background checks for potential gun buyers in the wake of mass shootings in Texas and Ohio over the weekend which left at least 31 people dead.

The informal protest gathered controversy online after a pair of individuals livestreaming the event on Facebook were heard asking someone to use voodoo on McConnell, or to “just stab the mother****er in the heart, please.”

A woman is on Facebook Live, outside of Senator McConnell’s home in Louisville, saying she hopes someone “just stabs the mother f*cker in the heart, please.” #KYSen pic.twitter.com/sHaPWqn32J

Other protesters shouted and made a ruckus outside the senator’s residence, banging objects and dragging a shovel back and forth along the asphalt, with McConnell, said to be recovering from an injury to his shoulder, thought to be inside.

Several members of Congress, including independent Senator Bernie Sanders, Democratic Senator Chuck Schumer, and House leader Nancy Pelosi called on McConnell to bring forward a vote on a gun control bill already passed by the House in February, with McConnell declining, calling for “bipartisan” measures to be taken instead.

The calls to violence outside McConnell’s residence and the #MassacreMoscowMitch hashtag sparked anger from Republican-leaning users online, with some tweeting about the country being “at a dangerous tipping point” and blaming Democratic-leaning media for the angry rhetoric.

After tweeting last night how happy he was #MassacreMoscowMitch was trending, Ali is on CNN this morning talking about violent extremism. pic.twitter.com/oeqblxWyey

Every tweet about Mitch McConnell’s accident is filled with the most vile hate you can imagine & fantasies about his death. Now far left lunatics are harassing his home while he recovers too. We’re at a dangerous tipping point and I hope everyone wakes up before it’s too late.

MSNBC and CNN is responsible for this madness.

At least 20 people were killed and 26 others injured on Saturday after a gunman opened fire on passerby in a Walmart in El Paso, Texas, with another gunman attacking people in Dayton, Ohio later in the evening, killing nine and injuring 26 others. Authorities are treating the pair of incidents as acts of domestic terrorism.

President Donald Trump spoke to the FBI and his attorney general about the incident, and said “a lot of things” were “being done right now” to put an end to the spate of mass shootings plaguing the US. Trump later proposed “strong” firearm purchase background checks to be put into a prospective immigration reform bill. On Monday, Trump called on Americans to condemn racism, bigotry and white supremacy, and said “more has to be done” to address gun violence, including reforms to mental health laws, and efforts to tackle a “violent culture” that he said was seen in things like “video games that celebrate violence.”