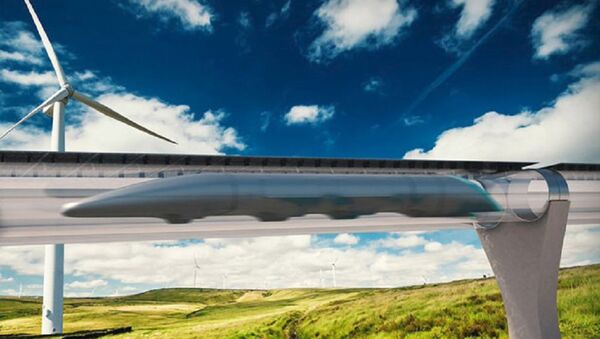 New Delhi (Sputnik): The government in India's Maharashtra state has given its in-principle approval to build the world's first Hyperloop transportation project between the cities of Mumbai and Pune. A Hyperloop is an ultra-high-speed ground transportation system similar to bullet trains.

Once completed, the Hyperloop project will achieve three objectives – reduce the travel time between Mumbai and Pune from 3.5 hours at present to less than 35 minutes; it will generate more hi-tech jobs and at least $36 billion in various socio-economic benefits; and it will allow the state of Maharashtra to create new Hyperloop components and manufacturing opportunities which can also be exported globally, a report in the Maharashtra daily Lokmat Times quoted Virgin Hyperloop One as saying in a statement.

India, through Maharashtra state, has taken the lead in constructing the world’s first Hyperloop transportation system, describing it as a public infrastructure project.

Another Hyperloop transportation project is expected to be undertaken between the cities of Vijayawada and Amaravati in the south-eastern coastal state of Andhra Pradesh. This project is the only other one that has gone beyond the memorandum stage in India.

India is currently the frontrunner, but a Hyperloop project is also coming up in the UAE by 2020. Similar projects are reportedly underway in China and parts of Europe.

Virgin Hyperloop One and DP World FZE Consortium are expected to invest $500 million to complete the first phase of the project.

In a statement, Jay Walder, CEO of Virgin Hyperloop, described the agreement with the Maharashtra government as a historic and significant milestone in public transportation and technology.

First brought into the limelight by former Tesla CEO Elon Musk in 2014, the Hyperloop involves the creation of a magnetically-propelled capsule that carries passengers or cargo through a low-pressure tube at over 1000 km/hour.